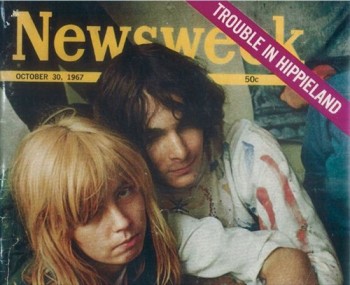 Sensational Newsweek cover story, Oct.30,1967, included an article by then 28-year-old journalist, Bruce Porter,"Gentle Marcy, A Shattering Tale" about a hippie girl gone wrong. Porter promised to not identify her but used her name and hometown in the story anyway. (Marcy not depicted in the cover image).

Bruce Porter, a retired Columbia University journalism professor and the author of the book-turned-movie Blow, decided in 2011 that he would find Marcy, the then-teen source he betrayed in an Oct. 30,1967 Newsweek cover story called “Trouble in Hippieland.”

Just 28 when he wrote “Gentle Marcy, A Shattering Tale,” Porter expressed regret in a feature published last month by the Columbia Journalism Review that after promising Marcy anonymity, he revealed the “17 year old” runaway’s first name and hometown (Flint, Mich.) in a sensational “hippie chick life gone wrong” profile. He cited her hard drug use, casual sex and a $200 abortion at a time when her mother thought Marcy was in New York working at Macy’s.

Soon after Porter’s Newsweek report, Marcy soulfully protested his betrayal in a Nov. 12/26, 1967 WNEW New York City radio station documentary. “They lied, Mother, they really lied” and “It isn’t like they said,” Marcy told her mom in a plaintive phone call. Marcy explained Newsweek offered her $65 to be interviewed. “I used a little bit [of the money] to get me some clothes and some shoes.” “Please, Mother, still love me when you read it, oh, Momma.”

Notice how the WNEW quote Porter used in CJR dodges a devastating charge against Porter — lying to his source.

Porter’s quote in CJR (note: words from the radio interview he cherry-picked are in yellow)

“Momma, this is Marcy,” she said in a rush. “Momma, you know Newsweek, you haven’t seen it, have you? Don’t let Daddy read it.” She then broke into sobs and had difficulty getting words out. “Please, Momma, please still love me when you read it. Oh, Momma, I really love you. I thought you wouldn’t love me anymore.“

The interview WNEW aired of the same passage was distinctly different. CJR‘s words are in yellow :

“Momma, this is Marcy. Yeah. Fine, mother, I have to talk to you about something. Listen, I needed – listen, you know in Newsweek, you haven’t read it have you? Don’t let daddy read it. Listen. Newsweek they said they wanted a story about a runaway so like I gave them, you know, I told them I was a runaway. And they said they wouldn’t use my name. They didn’t use my last name but they used my name. And they lied, mother, they really lied. Not about everything but they lied. Mother, I want you to know this, I really do. Mother, I know, I know when I first left daddy said stay away from drugs you know. I do take drugs. I’m not addicted, momma, it’s nothing. I just have, you know. Wait, listen to me. I want you to know because I’m sure you’ll read this, you know. Please, mother, still love me when you read it. Oh, momma, oh, momma, I really love you. I thought you wouldn’t love me anymore.”

Marcy’s damning accusations against Porter and Newsweek are gutted. The charges of lying go unmentioned in CJR, considered among the world’s elite media industry journals.

The CJR story was crafted differently. The narrative: For years in Columbia University and Brooklyn College journalism classrooms, Porter talked about violating his source’s trust by breaking a confidentiality agreement and naming her. Finally, 43 years after that betrayal, Porter decided to track down Marcy and apologize for revealing her name. Along the way he would record his journey for a documentary film about the encounter. The end.

Porter arrived in Flint on Friday, Jan. 7, 2011 along with filmmaker Daniel Loewenthal, who would capture the “reunion” with Marcy for the documentary. Before arriving, Porter made arrangements for research help with Rick Dunning, the manager of information services at the Flint Public Library, and alerted the then, print daily Flint Journal about his visit.