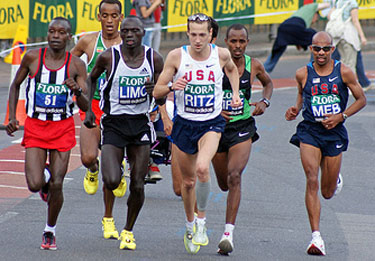 The story, “Marathon’s Headline Win Is Empty,” argued that Keflezighi’s achievement was a hollow one for America, because the runner is only “technically American.”

Of course, there is really no such thing as “technically American.” Someone is either an American citizen or they are not. The only real categorical in-between is that of immigrants working towards citizenship (which Keflezighi, who has lived in the U.S. since age 12, and has been a citizen since 1988, is decidedly not). And so a wide, outraged response followed Rovell’s post.

Factual and ethical problems with his story have been well covered–Keflezighi is a citizen, and started training after emigration to the U.S from Eritrea, since when he has competed in the Olympics for America. Rovell promptly apologized for his article in this addendum. But, in some ways, his apology raises more questions than it answers.

Rovell stresses in his response that rather than comparing born-Americans and naturalized Americans, he was actually trying to draw a distinction between American runners who did all their training in America, and American runners who became citizens after training in other countries. “All I was saying was that we should celebrate an American marathon champion who has completely been brought up through the American system,” he says.

Knowing now that Keflezighi did his formative training here, Rovell changes his mind, saying the runner actually does fit into the Rovell-category of “technical” Americans (which seems to be some kind of mix of people born in this country and athletes who didn’t become athletes until they got here.)

Yet, this is something of a straw-man apology, because if you look carefully, it’s hard to tell if this is what Rovell was actually arguing for in the first place. In his original story, he writes “some American-born runners did extremely well in yesterday’s men’s race.  If any of them stand on the top step of the podium in Central Park one day, that’s when I’ll break out my red, white and blue,” here stressing birthplace.

But he also says, “Nationality in running counts.”

Clearly Rovell doesn’t think nationality is the same thing as citizenship, otherwise there would be no question that Keflezighi is American. Nationality is “why many identify Kenya as the land of the long distance champions,” Rovell continues. So it seems he views “being from Kenya,” as being of a nationality. But what if a runner born and raised in Sweden somehow became a citizen of Kenya—would Rovell view that runner as ‘Kenyan”?  It is clear from his argument in his apology that he would not. So what else could the word nationality mean to Rovell?

1 : national character
2 : nationalism
3 a : national status; specifically : a legal relationship involving allegiance on the part of an individual and usually protection on the part of the state b : membership in a particular nation
4 : political independence or existence as a separate nation
5 a : a people having a common origin, tradition, and language and capable of forming or actually constituting a nation-state b : an ethnic group constituting one element of a larger unit (as a nation)

1, 2, and 4 don’t apply here; and 3 is also out because it would include runners trained in other countries who emigrate and gain citizenship, which Rovell makes it clear he thinks does not count.

5a/b could be it. But imagine again the Swedish runner moving to Kenya: Fluent in Swahili, and living in the country, the runner shares a language and a nation-state with all other Kenyans, but not necessarily a common origin, tradition, or ethnicity.  If as Rovell seems to  think, it’s not your home state or your language that define your nationality, it must be one of these others – common-origin, tradition, and/or ethnicity. Perhaps what Rovell is really describing here is race.  If so, his argument is completely false–unsupported by science, as the New York Times story on the subject points out.

But then, Rovell further writes, “It has been well-documented that since the mid-80’s, Americans haven’t had much success in the marathon. Many cite lack of motivation as the root of our troubles, as in our best athletes devote their lives to sports where they can make big money instead of collecting the relatively small paychecks that professional running offers. That, of course, is not the case with African runners, who see in the same winner’s check a lifetime full of riches.”

Here he seems to be implying that the difference between Kenya and America is not one of nationality, but one of motivation. Putting aside the fact that Rovell’s chosen phrase “lifetime full of riches,” is imperialist at best, this argument actually does seem to support the reporter’s later explanation and apology.

The problem is that Rovell is treading ethical and factual water here regardless of whether he’s talking about race or circumstance. Tommy Craggs at the DeadSpin blog says it better than we could:

“That’s all well and good, but the idea at the heart of Rovell’s first story — the mystique of the African marathoner — isn’t going away anytime soon.

Whenever a big marathon rolls around, we pretend that the Africans are winning less because their abilities were forged at some happy intersection of culture and circumstance and geological phenomena and more because their abilities derive from some super-special nucleic juju that no one else has. (Rovell wisely avoids this minefield only to bumble into another. He thinks that Africans run faster because they’re really poor.)”

Rovell’s apology–that he thought Keflezighi had been trained elsewhere–is immaterial. If Rovell meant to say the man’s win for America was inauthentic because of his ancestry, he’d be wrong.  If he meant to say it was inauthentic because of his training, he’d also be wrong. Every elite athlete gets to be the way they are through a unique combination of factors, and deserves to ally themselves with the country of which they are a citizen, without caveats.