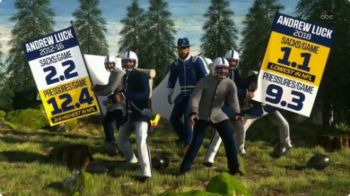 ESPN broadcast a graphic depicting the quarterback for the NFL Indianapolis Colts, Andrew Luck, as a Union general during the Civil War, with both Union and Confederate soldiers protecting him. The musical accompaniment for that bizarre visual was the anthem of the Confederate States of America, “Dixie.”

ESPN spokesperson Josh Krulewitz told iMediaEthics by e-mail, “It was a mistake to use this song. We regret having done so and we apologize.”

The “inspiration” for this gaffe would have been the parody Twitter account @CaptAndrewLuck, which tweets as if Luck were writing letters to his mother. As the Washington Post explained, the account is “a parody Twitter account that comments on real-time events in Luck’s voice — assuming, that is, that Luck is a leader on the front lines of the Civil War, corresponding with his mother. Yes, it’s kind of weird.”

Krulewitz also pointed iMediaEthics to Sporting News‘s report, which reported that “a source” said the “Dixie” song was inserted in after the graphic was OKed.