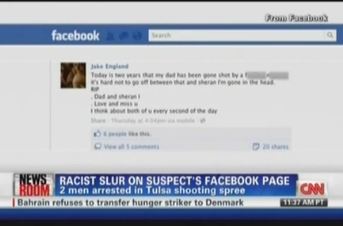 See above a screenshot from the CNN broadcast in which correspondent Susan Candiotti read the f-word and the n-word from a Facebook post, even though the words were blurred out in the on-screen image.

Candotti had read verbatim from a Facebook post made by one of the suspects in the shooting that contained the two words, according to TV Newser.

Candotti did warn  “Please excuse the language, it’s very sensitive” and then continued to read the post which includes the f- word and the n- word.  CNN had blurred out the two words in the on-air image of the post, TV Newser noted.  See the video of the segment here.

“In quoting someone else’s words, I repeated their offensive and inappropriate language. I deeply regret it.”

Newsbusters published a transcript of the segment here.

According to the Daily Caller, “This is the second time in recent weeks a CNN reporter has uttered the word on live television. Last month, Drew Griffin of CNN’s special investigations unit used a racial slur on live television when reporting on a case involving a federal hate crime in Mississippi.”

According to the Huffington Post, Griffin said the n-word “during a discussion about the hate crime conviction of a white Mississippi man named Deryl Dedmond ”  Griffin was describing what happened when Dedmond “intentionally ran over a black man named James Craig Anderson” and quoted Dedmond as saying “I just ran over that f—ing [n-word]”  (Dedmond pleaded guilty with two others to “federal hate crimes” over Anderson’s death, according to CNN.)

Interestingly, Griffin censored the f-word, but not the n-word.  See a video of the segment here on the Huffington Post’s website.

Because of the two cases, Newsbusters questioned: “Can the F-word and the N-word now be used on CNN if they dramatize racism?”

We have written to CNN asking what its policies are for use of the n-word and f-word on air, asking if Griffin also apologized for his use of the n-word, and asking for further comment. We will update with any response.

We wrote late last year when Dutch magazine Jackie apologized after calling singer Rihanna “the ultimate n**** b****.”  The magazine’s editor Eva Hoeke resigned after the article became controversial.  Rihanna slammed the article and Hoeke calling the article “degrading an entire race” and calling Hoeke “disrespectful and rather desperate.”

A few days after Hoeke’s resignation, Jackie’s publisher seemingly defended the magazine’s article, telling a Dutch news site that there was “nothing wrong” with the Rihanna article.

We wrote in February when CNN suspended anchor Roland Martin for his tweets during the Super Bowl.  Martin’s tweets were accused of being “homophobic” and CNN called the posts “regrettable and offensive” as well as “inconsistent with the values of our organization.”

See all our reports on CNN here.