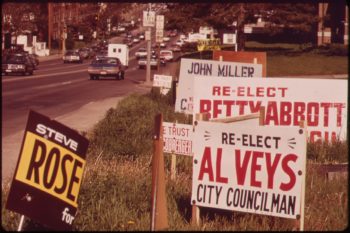 Journalists are, of course, allowed to have political opinions. However, they were reminded this week that they are required to put them aside when doing their jobs.

To wit, CNN and the San Francisco Chronicle both told their reporters not to participate in the Women’s March on Washington today.

“Rick was simply re-iterating the policy in advance of the marches this weekend,” a CNN spokesperson told TV Newser. When contacted by iMediaEthics, CNN declined to comment further.

“ABC News said it will have reporters covering the march, not participating, which is also their policy,” TV Newser added.

San Francisco Chronicle editor-in-chief Audrey Cooper told staff they can’t participate in any marches like the March on Washington.. “No newsroom employee, regardless of job function or title, can participate in political demonstrations of any sort,” she e-mailed staff, according to California Magazine.

California Magazine reported that it was a “potential firing offense. After our publication, Cooper e-mailed iMediaEthics to say “Nobody was ever threatened with firing.” [UPDATE: 1/23/2017 6:48 PM EST While Cooper e-mailed after publication about the firing issue, she hasn’t responded to our pre-publication e-mail with questions about the policy and announcement. We sent a follow-up in response to her post-publication e-mail asking about response for our questions but she hasn’t replied.]

“I have … reminded our journalist employees that political protest is not appropriate or ethical professional conduct. This newsroom will continue to cover the president-elect, his policies and his administration. We will do so ethically, honestly and unapologetically,” Cooper told California Magazine.

The decision doesn’t appear to square with the Chronicle‘s permission of staff participation in events like the San Francisco Gay Pride Parade, California Magazine noted.

iMediaEthics has written to Cooper for more information.