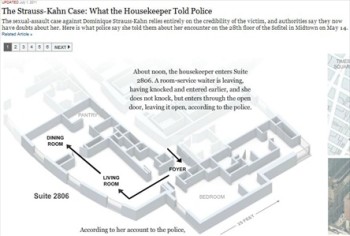 iMediaEthics wonders what the New York Times was thinking in its Sofitel infographic titled “Recreating an Encounter.”

We spotted this infographic after a tweet by @RayPride, re-tweeted by @EbertChicago, labeled it “distasteful.”

The infographic maps out what is still an alleged sexual assault by Dominique Strauss-Kahn in the Sofitel hotel.  Instead of being informative reporting, iMediaEthics finds the graphic, at best, to be overkill and insensitive.

Do New York Times readers really need to visualize the alleged attack details within the hotel space when the facts, at this stage of the developing story, are one-sided and worse, mostly from shadowy anonymous sources?

Should the New York Times “recreate” by a visualization any alleged sexual attack? iMediaEthics also wonders how sensitive this graphic map is, given there is an alleged victim.

We’re writing to the Times to ask the above questions and to explore exactly what editors thought the map would add to its coverage.