Corrections: Europe not a Nation, Judas betrayed for 30 Pieces of Silver & More - iMediaEthics

Corrections: Europe not a Nation, Judas betrayed for 30 Pieces of Silver & More

“A previous Web version of this story incorrectly referred to Europe as a nation.”

The New York Times mixed up who the Maccabees fought. The Dec. 9 correction:

“An Opinion essay last Sunday about Hanukkah misidentified the enemy of the Maccabees. The Maccabees fought the Seleucid Empire, not the Romans.”

The Times of London erred in reporting how many women get breast cancer. The Nov. 30 correction reads:

The City podcast: A Facebook post, tweet and previous version of Episode 6 of The City podcast misidentified the number of silver pieces Judas received for betraying Jesus. It was 30 pieces of silver. https://www.thecitypodcast.com/podcast_episode/operation-silver-shovel-episode-6/​

Corrections: Europe not a Nation, Judas betrayed for 30 Pieces of Silver & More 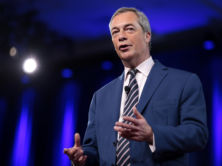 OK for Nigel Farage to say 'Jon Snow should be attacked'