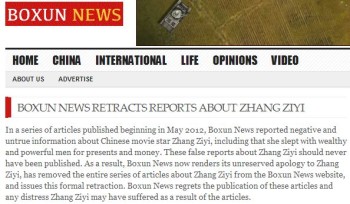 The Free Press‘s founder, Weican Null Meng, had published reports last year that claimed the actress was being paid for sex.  Specifically, the stories claimed that she was paid “more than 100 million for having sex with high-ranking Chinese officials.”

China Free Press is “a North Carolina non-profit corporation devoted to promoting free speech and democracy in China”; it is also referred to as Boxun News in the lawsuit. The Hollywood Reporter noted that the website is “blocked in China.”

The stories accusing Zhang of prostitution have since been unpublished from Boxun News‘ website but were based on anonymous sources. Zhang’s lawyers criticized Boxun News‘ reliance on anonymous sources. According to Reuters, the lawyers said in a statement, “If reporters are permitted to write false statements and then hide behind anonymous sources known only to them allegedly out of concern about what might happen to such sources if they are disclosed, they can say whatever they want with impunity.”

South China Morning Post added that the website didn’t seek comment before publication. In response to the lawsuit, the site said it didn’t want to give up its sources for fear of retribution in China and accused the actress of being an agent of the government. It accused her of suing as “an effort by the Chinese government (albeit by proxy) to attach and retaliate against an independent journalistic critic of its brutal and repressive practices, and to use the American judicial system as an instrument to identify dissidents for persecution,” South China Morning Post reported.

As part of the libel settlement, Boxun News published a retraction on its website admitting that the reports were “negative and untrue” and apologizing to Zhang. The retraction reads in part:

The retraction added that its anonymous sources, who were the sources for the accusations against Zhang, couldn’t “support the information reported.” Further, Boxun News noted that it didn’t give Zhang an opportunity to comment before posting the allegations. The retraction said:

“Boxun News now acknowledges that its reports were insupportable and improper, and that Zhang Ziyi has never been questioned in connection with any investigation related to the allegations set forth in the Boxun articles. Boxun News emphatically disavows any news reports to the effect that there is no basis to correct or retract the Boxun articles in question, or that any allegation regarding Zhang Ziyi set forth in those articles is true.”

iMediaEthics has written to lawyers for both Zhang and Boxun News for further comment and will update with any response.