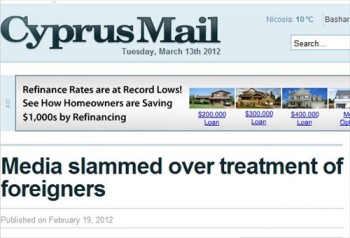 Cyprus’s media ethics committee criticized the Cyprus press for “the way the media deals with foreigners’ deaths, raising issues of “adverse discrimination”,” according to the Cyprus Mail.

The Cyprus Union of Journalists’ website notes that the union “has formally adopted the Declaration of Principles of the International Federation of Journalists” and that the union has a “Rules and Ethics Committee” to maintain the ethics code.  There is also a Cyprus Media Complaints Commission, which identifies itself on its website as “an independent press council, responsible for the self-regulation” for print and broadcast media created in 1997.  The commission handles complaints from the public, however its website hasn’t published any complaints since 2005.  According to its website, the commission cannot “adjudicate damages.”

The media ethics committee’s criticism was in response to a complaint about the media’s reporting on a Moldovan man’s death in a December car accident, according to the Cyprus Mail.  As the committee explained, the media outlets “repeatedly referred to [the Molvodan man] as ‘the foreigner.'”

That is a common practice of Cyprus media, according to the committee.  The Cyprus media also “tends to project that persons who aren’t Cypriots  are inferior and that their lives do not have the same value as those of Cypriots,” the Cyprus Mail quoted the commitee as saying.

By doing so, the Cyprus media presents “foreigners” as “second-class citizens,” according to the Cyprus Mail.

See here the code of practice. We have added this code to our list of international media ethics codes here.

We have written to the Cyprus Media Complaints Commission, the Cyprus Union of Journalists and the Cyprus Mail for more information and will update with any response.