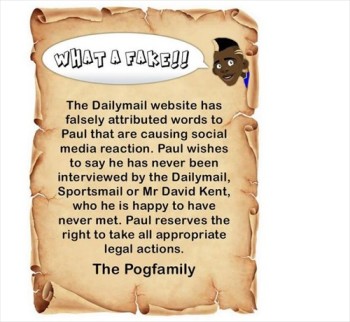 Pogba is a midfielder who plays for the Italian team Juventus.

The interview claims Pogba responded to the question of what was the “worst moment” in his career as follows:

“My time at Manchester United. Of course when you are at such a big club you understand you need to be patient for your chance, but I did not feel respected or valued as a player or a man.”

Pogba called the interview “fake” in a June 1 tweet.

The tweet included a photo signed ‘the Pogfamily’ in which Pogba said,

“The Dailymail website has falsely attributed words to Paul that are causing social media reaction. Paul wishes to say he has never been interviewed by the dailymail, Sportsmail or Mr David Kent, who he is happy to have never met. Paul reserves the right to take all appropriate legal actions.”

The disputed quote was part of a Q & A, which controversially says Pogba slammed his experience at Manchester United.

The article states “Paul Pogba spoke to Sportsmail about winning the Serie A title with Juventus, the difficult time he endured during his spell at Manchester United and his dream to play in the World Cup with his twin brothers.”

According to sports site Bleacher Report, Pogba is “currently with France preparing for the World Cup.”

iMediaEthics has written to the Mail for a response to Pogba’s claim that the interview is fake. We’ve also reached out to Manchester United for further comment on behalf of Pogba.