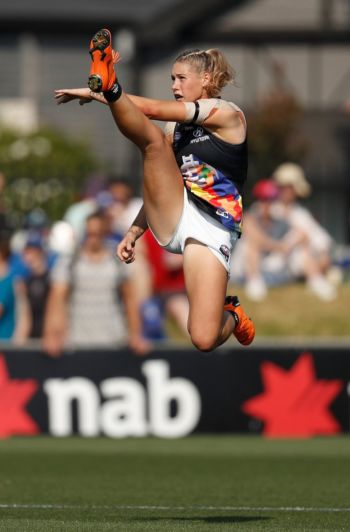 Channel 7 Australia posted a picture of Australian Football League player Tayla Harris kicking a goal on its Facebook page, but then deleted the post because of “reprehensible” comments from trolls.

In a March 19 tweet, Channel 7’s AFL account tweeted that it posted the photo to “celebrate the power, athleticism and skills on show in Carlton’s thrilling win over the Western Bulldogs.”

However, “the image attracted a number of comments, some of which were inappropriate and offensive,” Channel 7 wrote. “As a consequence we have removed the image and the comments.”

That received criticism, and then Channel 7’s AFL account apologized for having “sent the wrong message” in deleting the picture.

“We’re sorry. Removing the photo sent the wrong message. Many of the comments made on the post were reprehensible & we’ll work harder to ban trolls from our pages. Our intention was to highlight @taylaharriss incredible athleticism & we’ll continue to celebrate women’s footy.”

Harris herself posted the picture on Twitter writing, “here’s a pic of me at work… think about this before your derogatory comments, animals.”