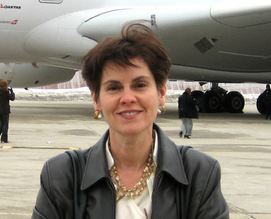 The Daily Mail was accused of plagiarizing a story by Christine Negroni, pictured above. (Credit: ChristineNegroni.com)

The UK Daily Mail was accused of plagiarizing a New York Times article about electronic device use on planes, as iMediaEthics previously reported.

“An earlier version of this article was mistakenly attributed to the writer Liz Thomas. We regret that a revised version of the article also failed to attribute the source to the New York Times. “

iMediaEthics wrote to Christine Negroni, the journalist who wrote the article for the New York Times.

We asked her how the plagiarism was found and if she had any comment.

According to Negroni, aviation writer Mary Grady “is the heroine in this story” because Grady found the plagiarism and brought it to the Times’ attention.  We wrote to Grady by e-mail asking how she discovered the similiarities between stories.

According to Grady, when she spotted the article, she passed it on to the New York Times, but didn’t have any contact with the Daily Mail over the story.

As Negroni explained, Grady alerted Negroni’s editor Phyllis Messinger to the alleged plagiarism, and Messinger told Negroni.  Negroni didn’t know the Mail had written a similar story and used quotes and content from her story until hearing from Messinger, she said.

“From that point on, I just let the Times take care of it and apparently they did.”

What did Negroni think of the plagiarism?  “My short answer is that its wrong, that’s obvious. But its also pretty audacious. I’m also flabbergasted that anyone working in an online publication like the Online Mail doesn’t know how quickly the lifting of someone else’s words will be detected. In exactly the way I think it was.”

“These days people filter news so that they see many publications that publish news of specific interest. I read one or two newspapers a day, but thanks to the internet and news aggregators,  I see aviation news from around the world, probably 2 dozen newspapers/television stations/magazines/trade publications. I’m gonna notice a story from two different sources that read exactly the same.

Negroni explained that she even heard from some of her sources for the story, who told her they hadn’t been interviewed by the Mail.   One source even commented that the plagiarism was “a great compliment” to Negroni’s story and the research that went into it, according to Negroni.

Negroni said she hasn’t had any contact with the Mail.  “If someone from the publication felt the need to apologize, I’m sure they could find me. I know I’m easy to locate online as I get email from readers all the time.”

iMediaEthics wrote to New York Times’ Phyllis Messinger seeking comment as per Negroni’s advice.  She redirected us to standards editor Phil Corbett, who stated “I don’t think we’re going to have any comment.”

iMediaEthics has written to the Daily Mail for comment and more information. We will update with any response.