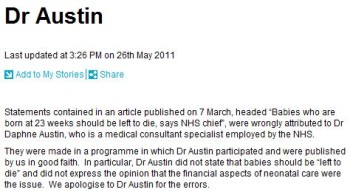 The Daily Mail has apologized to a doctor for reporting she said “babies who are born at 23 weeks should be left to die.”  But, Tabloid Watch criticized the Daily Mail for burying the correction.

Read more here and here on Tabloid Watch about the Mail’s “buried corrections.”

The Daily Mail’s apology claimed that the comments were “wrongly attributed” to the doctor, Daphne Austin, and that the Mail re-published them “in good faith.” The apology states:

“In particular, Dr. Austin did not state that babies should be ‘left to die’ and did not express the opinion that the financial aspects of neonatal care were the issue.”