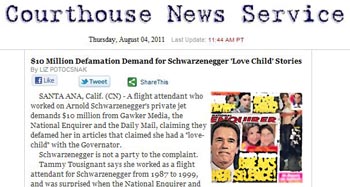 A former employee of Arnold Schwarzenegger is suing Gawker, the Daily Mail and the National Enquirer for libel. (Credit: Courthouse News, screenshot)

A former “personal flight attendant” for Arnold Schwarzenegger is suing Gawker, the Daily Mail and the National Enquirer for libel and invasion of privacy after they reported in articles from 2003 to 2011 “portraying her as the ex-California governor’s mistress and one of her sons as his secret love child,” OC Weekly reported.

Tammy Tousignant was a flight attendant for Schwarzenegger from 1987 to 1999, according to OC Weekly.

It appears the reports labeled Tousignant as the woman in the rumored, and later confirmed, affair and child between  “Schwarzenneger and a Schwarzenegger employee.” This year, the real woman was revealed as former maid and cook Mildred Baena.

Gawker retracted their reports in May 2011.  Courthouse News noted that Gawker’s retraction came after Gawker’s error was singled out in a Los Angeles Times report.