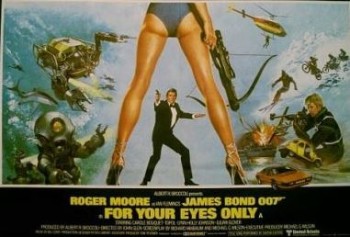 A British poster for the 1981 film For Your Eyes Only (Credit: Wikipedia)

The UK Daily Mail claimed Roger Moore, who starred in many James Bond films, “groped” a woman during filming of the 1981 Bond movie  For Your Eyes Only.

But, he denies groping the woman, Australian actress Debbie Newsome, or giving her jewels, champagne and “an inappropriate note” — all which the Mail claimed, ITV reported.

“It was also wrongly claimed, amongst other things, that he had given Ms Newsome a gold bracelet covered in diamonds together with a bottle of expensive champagne and an inappropriate note, and this happened during a party at which his then wife was present,” Moore’s lawyer Amy Bradbury said, according to the Australian Associated Press.

Moore sued and won an undisclosed settlement for the October 2014 article, “Spy who ‘Groped’ Me,” the Australian Associated Press reported.

The Mail also unpublished the article  and apologized to Moore in court, the Australian Associated Press added.

“The defendant apologises for any distress and embarrassment caused to Sir Roger and his family,” Daily Mail lawyer Martin Wood said in court, the BBC reported.

The Mail apologized in a print statement as well, the BBC noted. The March 15 note in its “clarifications and corrections” column states:

“An article published on 20 October 2014 headed  ‘Spy who “groped” me’ reported claims in an Australian magazine that Sir Roger Moore had groped a young actress, Debbie Newsome, during the filming of the Bond movie ‘For Your Eyes Only’ and made inappropriate advances towards her.

“We have been informed by both Sir Roger and Ms Newsome that these claims are false, and accept that the allegations were untrue. We apologise to Sir Roger for any distress and embarrassment caused.”

In 2013, the UK Sunday People apologized to Moore after it published a fake interview with someone posing as him. The Mail paid him legal costs for the Sept. 16, 2012 article “I’ve had Moore women than James Bond.”

In 2011, the Mail paid Moore’s wife Lady Moore damages for claiming she had two affairs.