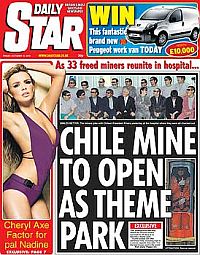 The Daily Star's front page story? The now famous Chilean mine is being turned into an amusement park. As The Guardian and other media outlets spotted, they were apparently duped by a satirical article. (Credit: the Daily Star)

The Daily Star published a fake story about the mine which held 33 Chilean miners underground for more than 2 months, The Guardian’s Roy Greenslade reported Oct 15.

The Oct 15 cover story for the UK daily newspaper reported that the mine would “open as theme park.” The Daily Star has a circulation of more than 700,000, and is “one of the largest circulation newspapers in the world,” according to Mondo Times.

“I noted the claim that it was an initiative by the Chilean Tourist Board and moved on, surprised that the story had not emerged during my extensive watching of the BBC, Sky News and CNN.” Greenslade explained.  He added that Tabloid Watch, however, debunked the story.

Tabloid Watch found that the Star story bears resemblance to a story in a website named The Spoof.  Tabloid Watch, which “highlights the inaccurate, exaggerated and untrue stories” published by British tabloids, also noted that the Star’s “exclusive” story devotes only two of 14 paragraphs to the “theme park.”

“The Chilean Tourist Board now aims to turn the mine site into a money-spinning theme park. They are also set to offer adventure holidays including a trip underground on the rescue capsule that brought the 33 to safety.

“No decision has been made on when it could be opened but a spokesman for Turismo Chile said: “We think many people will be attracted. There is great tourist potential.”

The Spoof has a telling website name but also labels itself “always there with the funniest spoof headlines.”  Its “about page” not only identifies the site as “funny satire and parody,” but  “one of the leading satire newspapers on the internet.  Providing an irreverent and satirical slant to the current big news stories throughout the world, bringing you more funny stories than you can shake sticks at.”

“Members of the public will now be able to ride the Pegasus 2 capsule down to the mine floor and see how the miners lived for the last 70days,” the Spoof story announced.

The Spoof’s article also satirically wrote that “Already, there is a Chilian Miner Diet book in publication after the 30 miners collectively lost 750kgs in 2 months. To back the proponents of the book a ‘Fat Camp’ is to be set up for obese members of the public who wish to lose enough weight to take a ride down the mine in the Pegasus 2 capsule.”

Greenslade wasn’t alone calling out the Star for its story.  The Daily Mail also debunked the story in its report about the media attention directed toward the recently freed miners.

“Contrary to popular belief, there are no plans to turn the San Jose site where a group of Chilean miners spent 69 days trapped underground into a theme park,” The Daily Mail explained. The New Statesman and Anorak also wrote about The Daily Star’s fake story.

iMediaEthics wrote in late July  when the Daily Star apologized and paid damages for its hoax story that Rockstar Games was making a game based on a real-life July shooting rampage in Britain.  The Daily Star had reported the game would be called “Grand Theft Auto Rothbury,” a twist on Grand Theft Auto, and had contacted the family member of one of the victims for comment.

At the time, Greenslade noted that the hoax video game story was just “the latest example” of problematic journalism from The Daily Star under Richard Desmond’s ownership, listing a half dozen examples in 2010 of Daily Star errors.

iMediaEthics has written to the Chilean Tourism Board and The Daily Star for comment and will update with any response.