Deaf Parliament Member Blinked While Listening to a Speaker, BBC Apologizes for Suggesting he was Sleeping - iMediaEthics

Deaf Parliament Member Blinked While Listening to a Speaker, BBC Apologizes for Suggesting he was Sleeping 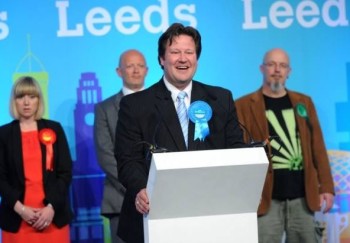 A picture may be worth 1,000 words, but sometimes that might not tell the whole story.

The BBC  shared a photo of a Parliament member earlier this month, suggested he was sleeping during a debate. But he was blinking while listening to a speaker he needed to help him hear the debate.

BBC Newsbeat’s Twitter account @BBCNewsbeat posted a photo the Parliament member, Alec Shelbrooke, leaning against a bench with his eyes shut during a trade union debate. But, Shelbrooke is partially deaf and was leaning into the bench because there was a speaker there.

ITV reviewed the video of Shelbrooke, finding out that the image was of Shelbrooke apparently blinking. “The truth is Alec Shelbrooke’s eyes were wide open for almost the whole of the four seconds the camera was trained on him – except, of course, for when he blinked,” ITV reported.

The BBC apologized and deleted the original tweet, according to the Guardian. UK political website Guido Fawkes posted a screenshot of the original tweet, which showed the photo of Shelbrooke with his eyes shut and the text “This pic of Conservative MP for Elmet and Rothwell, Alec Shelbrooke, resting his eyes during a debate is going viral.”

The BBC told iMediaEthics that the tweeted apology was also posted on the BBC’s corrections and clarifications page.

Shelbrooke told Guido Fawkes: “I am genuinely slightly deaf and struggle to hear. I had taken part in the debate and was trying to hear the wind ups. Seems a shame I get trolled due to being slightly deaf.”

The Sept. 15 Twitter apology reads: “Very heartfelt apologies to @alecshelbrooke MP. He is partially deaf and was listening to a speaker.”

Very heartfelt apologies to @alecshelbrooke MP. He is partially deaf and was listening to a speaker. pic.twitter.com/CSvocBZ9qT

Deaf Parliament Member Blinked While Listening to a Speaker, BBC Apologizes for Suggesting he was Sleeping