Denver radio host: ‘you wish for a nice school shooting’ 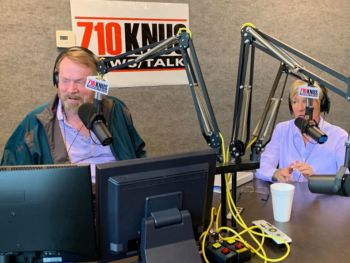 Denver radio 710 KNUS canceled a radio program after host Chuck Bonniwell commented, “You know, you wish for a nice school shooting to interrupt” the impeachment of Pres. Donald Trump.

In response, his co-host, who is also his wife, Julie Hayden said in part “don’t even say that” and Bonniwell commented “which, no one would be hurt,” CNN reported.

In a statement on its website, KNUS, which is owned by Christian and conservative Salem Media Group, wrote in part:

“Given the history of school violence that has plagued our community, 710 KNUS confirms that an inappropriate comment was made on the Chuck & Julie show by co-host Chuck Bonniwell.  A programming decision was made to end the program immediately.”

KNUS is the same station the last month was embroiled in controversy when it pulled host Craig Silverman off the air when he was criticizing Pres. Trump. Read that backstory.

Bonniwell issued a statement according to Denver Fox-affiliate KDVR reading: “I made an inappropriate comment meant as a joke. I’m sorry it was not received in that light.”

According to the progressive online news site Colorado Times Recorder, Bonniwell is “a steadfast Trump supporter,” the publisher of the Cherry Creek/Glendale Chronicle, and has a long track record of comments that draw media scrutiny,” including his 2018 comment about then-gubernatorial candidate, now governor Jared Polis, saying he was backed by the “gay mafia.”

According to the Cherry Creek/Glendale Chronicle‘s website, it is mailed to about 85,000 houses in Denver and 2,000 businesses. The website claims it is “the largest mailed circulation of any Denver newspaper or magazine.” Bonniwell is the publisher and sole owner, the website states and his wife, Hayden, is the Director of Marketing.

On the Facebook page for Bonniwell and Hayden’s show, “Chuck and Julie,” the couple admits the comment was “inappropriate.” They said:

“As you know, 710KNUS has cancelled our show.
It’s difficult to put everything into words here but we hope you can hear our hearts.
As journalists and radio hosts we have covered every school shooting and tragedy since Columbine. We have witnessed the unbearable pain and grief felt by the victims, their families and the community. We have a child in elementary school who has to practice active shooter lockdown drills and like all parents, we worry about the safety and well being of our child and his classmates.
Chuck’s comment about school shootings was inappropriate and if he could un-say it he would. Violence causes too much hurt for victims and their families and we truly did not intend to add to that pain.
We’ve always tried to tell what we call the truth straight up and be willing to talk about any topic or controversy – even when we are in the middle of it.
Finally, to those – whether you agree or disagree with us – who have shared your afternoons with us, our sincere thanks and appreciation.

The website for the podcast claims on its About Page, “Chuck has a great sense of humor.”

Denver radio host: ‘you wish for a nice school shooting’