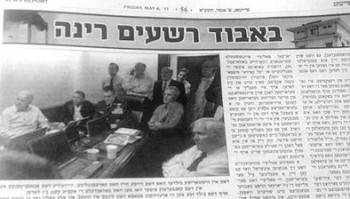 Der Tzitung apologized yesterday, the Washington Post reported.  In the newspaper’s statement (see here), Der Tzitung said the newspaper’s photo editor published the photo “but in his haste he did not read the ‘fine print’ that accompanied the picture, forbidding any changes.”  iMediaEthics notes that someone at the newspaper had the time to Photoshop two people from the photo but missed the note about not manipulating the image?

The newspaper went on to apologize to the White House and the State Department and to say that it shouldn’t have run the Photoshopped image. It confirmed speculation that the women were photoshopped out because of religious beliefs about women’s bodies. The newspaper stated:

“Because of laws of modesty, we are not allowed to publish pictures of women, and we regret if this gives an impression of disparaging to women, which is certainly never our intention. We apologize if this was seen as offensive.”

However, Der Tzitung countered any claims that it belittles women and noted that Clinton was supported by New York Orthodox Jewish communities in elections.