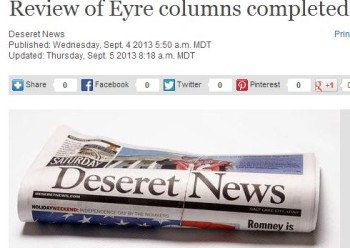 The Deseret News announced Sept. 4 that it finished its review of the Eyres' work. (Credit: Deseret News, screenshot)

Utah-based daily newspaper The Deseret News suspended the publication of a column by Linda and Richard Eyre for a month because of their failure to attribute information, according to a statement published by the newspaper.

The articles in question now contain notes at the top of each article saying “the original version of this column failed to attribute a passage,” crediting the original writer, and saying when the column was published in print. The Deseret News wrote:

“The Deseret News demands accuracy in attribution and sourcing. We require columnists to submit articles that are original and appropriately cited. The Eyres have acknowledged the seriousness of these lapses and apologized to those involved.”

The articles lifted from the Washington Post, the National Marraige Project at the University of Virginia, Wikipedia, The New York Times, and a man named Elder L. Tom Perry,

Four of the five articles were published after April 2013; the last column in question was published in October 2011.

Jim Romenesko noted that Richard Eyre told the Salt Lake Tribune that he and his wife “write our columns as unpaid volunteers” but still “should have been more careful.”

We’ve reached out to the Deseret News’ editor Paul S. Edwards asking why it unpublished the first instance of lifting but just corrected the others. We also asked for confirmation that the Deseret News intends to continue publishing the Eyres despite knowing of numerous attribution issues, and if yes, why and what extra scrutiny will be applied. Finally, we’ve contacted the Eyres about the findings from the review of their work. We’ll update with any responses.