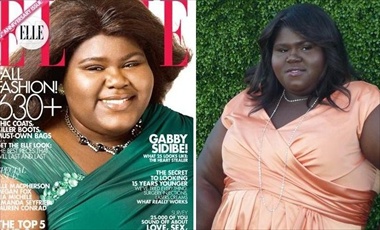 ELLE magazine is under fire for its cover photo of plus-size, African-American actress Gabourey Sidibe.

Bloggers are accusing the fashion magazine of lightening Sidibe’s skin.  Also, ELLE has been criticized for tightly cropping Sidibe’s photo to only show her face, while the other three covers show most of the cover models’ bodies.

And, even though Sidibe is featured in the 25 “Most Notable Women under 25,” section, she is actually 27 years old.  (The October issue celebrates ELLE’s 25th anniversary of publication.) The blog Womanist Musings is credited with first questioning the photos in its Sept 13 post.  “Photoshopping is quite common in magazines, but when they chose to lighten a dark-skinned Black woman, it is racist no matter what the original intent was.”

ELLE denies any photo editing or lightening.  Yahoo reported a statement from the magazine via e-mail:

“Nothing out of the ordinary was done. We have four separate covers this month and Gabby’s cover was not retouched any more or less than the others. We had 25 cover-worthy subjects in our portfolio and we chose Gabby because of who she is. We shot this as a story of exuberant young women changing the world. If you take a look at the portfolio, each of the women were shot in different ways and for different reasons.”

Further, ELLE’s editor-in-chief, Robbie Myers, says “it’s not a controversy,” E! News reported. “What’s so sad about it is that people have not looked at anything else but this. There’s an incredible portfolio inside that Joe [Zee] and Carter [Smith] shot . They haven’t looked at it. People want to make something out of nothing. It’s sad the legitimate news media picks up on this.”

“It sort of boils down to this,” Myers explained. “At a photo shoot, in a studio, that is a fashion shoot, that’s glamorous, the lighting is different. The photography is different than a red carpet shot from a paparazzi.”

She emphasized, “We absolutely did not lighten her skin. Retouching is when we take a piece of hair and move it out of her eye, so you can’t compare a picture on a press line from what you do in a studio, where your job is to make them look beautiful. This is their controversy. We’ve seen these things before. I am sad that no one has cracked the magazine and looked at it. We gave her a cover, and she loved it.”

Sidibe’s representative seemingly didn’t address whether the photo was lightened or not, as her representative is quoted as saying in response to the controversy that “Gabourey is absolutely thrilled to be on the cover of the magazine’s 25th anniversary issue.” Yahoo noted that “similar claims about skin lightening were made in 2008 about the possible whitening of Beyonce’s face for a L’Oréal Paris ad and in 2009 for an ad with Indian actress Freida Pinto.”