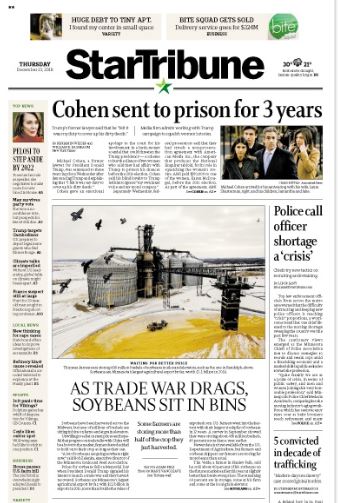 The Minneapolis Star Tribune‘s longtime movie critic, Colin Covert, resigned this month after the newspaper found out that he had plagiarized from other writers.

In a note to readers, editor Rene Sanchez and managing editor Suki Dardarian explained how a reader noticed that Covert’s 2009 review lifted a “unique phrase” — “self-glorifying masochistic mush” from another film critic Pauline Kael’s 1974 review for a different film.

“After additional research, editors identified other phrases in Covert’s ‘Nine’ review that are identical to phrases in other reviews written by Kael, including ‘archaic big-musical circus,’ ‘comic-strip craziness’ and ‘stardust is slightly irritating,'” Sanchez and Dardarian wrote. “Further examination of some of Covert’s work identified eight other reviews that contained unique phrases used previously by writers for the New York Times, Paste Magazine, vulture.com, the Wall Street Journal, IndieWire and Hollywood Reporter.“

Sanchez and Dardarian noted that Covert worked for the paper for thirty years, that the paper is unpublishing “all of Covert’s work,” and that the paper is flagging the problems to outlets that  republished Covert’s articles. Further, they quoted Covert apologizing for having “compromised the Star Tribune‘s meticulous reputation for integrity.”

iMediaEthics contacted Covert over Twitter for his response; he pointed iMediaEthics to Minnesota Public Radio’s article interviewing him.

He denied it was plagiarism and argued it wasn’t “nefarious,” telling MPR, “I think you can certainly make a very convincing case that I was borrowing without attribution work that was done by a writer much superior to me. Far, far, far, far better than me. And all I can do is look at it and say, clearly, I was not on my ‘A’ game that day.” He added:

“It doesn’t seem like it is. And that’s a habit that I developed over the years. I would find an interesting turn of phrase, a witticism or something like that, and if I was applying it not to something that was identical to the subject that I was borrowing from but something was a distant cousin at best, it seemed to me like it didn’t matter. It was no big deal.”