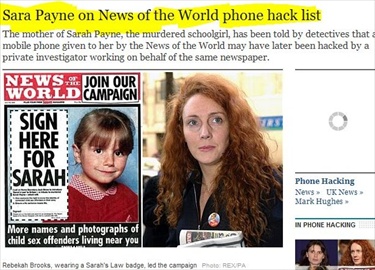 News of the World is accused of hacking the phone of Sara Payne, the mother of murdered 8-year-old Sarah Payne. (Credit: Telegraph, screenshot) gmail, youtube to mp3

News of the World may have hacked a phone given to a murdered girl’s mother, the Guardian reported.

The phone was given by former News International CEO and former News of the World editor Rebekah Brooks to Sara Payne, the mother of eight-year-old murdered girl Sarah Payne, the Guardian explained. The phone was to be used “for the benefit of the campaign for Sarah’s law.”  Payne’s daughter Sarah was killed in 2000.

According to the Guardian, police didn’t find Payne’s name in private investigator Glenn Mulcaire’s records, however, she was told this week that police investigating the phone hacking charges “told her they had found her personal details among the investigator’s notes. These had previously been thought to refer to a different target.”

Payne even supported the newspaper in its final edition, calling it an “old friend,” the Guardian noted. The Telegraph posted Payne’s full article published in News of the World here.  The story is headlined “News of the World proved it is a force for good.”

Brooks responded to the allegations in a statement calling the charges “abhorrent” and “particularly upsetting.”  The Washington Post noted that Brooks distanced herself from any implications of hacking, by claiming the phone wasn’t a “personal gift.”

The Telegraph explained that Sara Payne “worked closely with News of the World on a campaign that led to parents being given the right to check whether people with access to their children had convictions for sexual offences.” Brooks backed Payne’s campaign, the New York Times noted.

The New York Times explained the revisions to British law as a result of Payne’s lobbying: “Under the terms of the Child Sex Offender Disclosure Scheme, parents are allowed to ask the police if a known sex offender lives nearby.  After a trial period, the law was implemented across England and Wales last year.”

Brooks invoked her work with Sarah’s Law “four times” during her comments to Parliament July 19, The New York Times added.  She reportedly explained that her “use of private investigators” as News of the World ‘ editor “was purely legitimate” and for the purpose of Sarah’s Law.”

Parliament member Tom Watson commented on the allegations, according to the Guardian. Watson stated:

“This is a new low. The last edition of the News of the World made great play of the paper’s relationship with the Payne family. Brooks talked about it at the committee inquiry. Now this. I have nothing but contempt for the people that did this.”