'Did we fool you?' USA Today Duped by Selfie Shoes hoax, Failed to fact check before publication - iMediaEthics

‘Did we fool you?’ USA Today Duped by Selfie Shoes hoax, Failed to fact check before publication 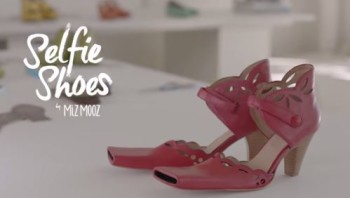 A screenshot from MizMooz's promotional video for the fake product selfie shoes.

The article claimed that the shoe company Miz Mooz was selling “selfie shoes” for $199 starting April 2. The shoes were purported to make it easier than a selfie stick to take a selfie by setting up a phone dock in the toes of your shoes.

Instead of correcting or retracting the story based on fake news, a “clarification” now placed atop the article reads: “USA TODAY has confirmed that this is an early April Fools’ Day joke sent as legitimate news.” iMediaEthics asked why USA Today didn’t check before publication.

The original article by Arienne Thompson appears to remain intact.

The joke was apparently sent to USA Today in the form of a prank press release from real company Miz Mooz. The USA Today article quoted from a Miz Mooz press release as saying:

“In thinking about bringing innovation to our shoes, we asked ourselves: How do we take the everyday comfort and convenience our consumers have come to love about our footwear to the next step?”

iMediaEthics checked out Miz Mooz’s website. On its homepage is a link to the “selfie shoes.”

Miz Mooz has a video on its website promoting the prank product as if it were real saying its “selfie shoes” would make it easy to take selfies without having to lug around a selfie stick.  See the video below.

Below the video, Miz Mooz asks “Did we fool you?” and offers a promo code.

iMediaEthics has also asked the USA Today reporter who was duped why there wasn’t a transparent correction admitting USA Today was duped instead of the misleading clarification.

See all of iMediaEthics’ reports on April Fools Day pranks.

‘Did we fool you?’ USA Today Duped by Selfie Shoes hoax, Failed to fact check before publication