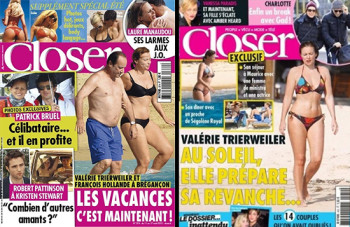 Valerie Trierweiler, the former partner of French president Francois Hollande, is suing Closer for invasion of privacy after the French magazine published photos of her on vacation on the island Mauritius, Agence France-Presse reported.

Closer‘s website currently has its cover image of Trierweiler on the beach blurred. The photo were published Feb. 6.

According to the Daily Mail, the photos show her “in a two-piece bikini, swimming and walking around the sunbeds of her hotel.”

Closer is the same magazine that last month published photos and a news report about Hollande having an affair with actress Julie Gayet. About two weeks after the Closer report, Hollande said he “ended my partnership with Valerie Trierweiler.”

Gayet said in mid-January she was suing for invasion of privacy over the report, as iMediaEthics wrote at the time.  Hollande said he wouldn’t be suing because of his position as president.  Closer said it would unpublish the photos and report from its website.

This isn’t the first time Closer has gotten in trouble for photos though. In late January, Closer was fined for a similar case of publishing bikini photos from Mauritius. According to a Jan. 25 Agence France Presse report, the magazine published photos of France’s Culture Minister Aurelie Filippetti in a bathing suit on the island.

And, in 2012, the UK Royal Family sued the magazine for invasion of privacy over topless photos of Kate Middleton sunbathing at a private house, as iMediaEthics wrote at the time.

Trierweiler has also previously sued over these types of vacation photos, The Daily Mail noted.

According to a 2012 Reuters report, Trierweiler sued Closer, Voici and Public for publishing cover pictures of the pair on vacation. Trierweiler was awarded 2,000 Euros from magazine VSD for invasion of privacy over the photos as well.

iMediaEthics has written to Closer for comment about the lawsuit and asking why it blurred its photos of Trierweiler on its website. We’ll update with any response.