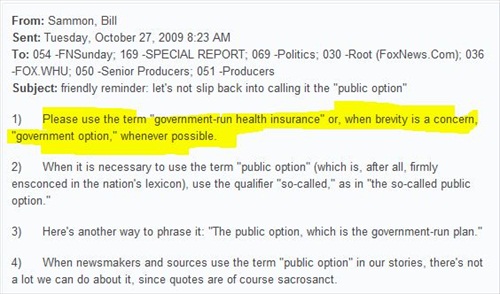 An Oct. 27 e-mail from Sammon advises staff to “use the term ‘government-run health insurance” as opposed to “public option.”

When using the term “public option,” Sammon instructed staffers “use the qualifier ‘so-called.'”

In response, Clemente wrote thanking Sammon and advising that “The public option, which is the government-run plan,” is “the preferred way to say it, write it, use it.”

Sammon explained the e-mail in an interview with The Daily Beast’s Howard Kurtz.

Sammon reportedly reasoned that the “public option” phrase “is a vague, bland, undescriptive phrase.”  According to Sammon, Kurtz reported, “government-run plan” is “a more neutral term.”

Further, Sammon claimed:  “I have no idea what the Republicans were pushing or not. It’s simply an accurate, fair, objective term.”

Sammon also asserted that he has been neutral and has 25 years experience as a reporter.  However, Kurtz noted that in the past year, “Sammon has been notably unsympathetic to the Obama administration” in Fox appearances.

New York Magazine questioned: “So was Sammon’s memo an example of the network catering to GOP talking points? He’s got decent cover” by saying that “government-run plan” is clearer than public option.  However, New York Magazine doubted that the terminology shift wasn’t partisan related, given the addition of “so-called” to a “policy that liberals are championing.”