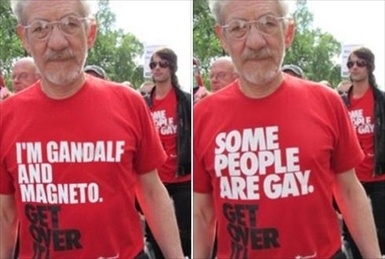 Quigley, managing editor for the “geek culture,” technology and entertainment website, wrote that the Photoshopped photo, which shows McKellan wearing a red T-shirt reading “I’m Gandalf and Magneto. Get Over It!,” has started “to make its way around” even though the real photo shows McKellan wearing a shirt saying “Some People Are Gay. Get Over It!”

Greg Stekelman, the jokester, doctored the photo purely for fun and posted it on a personal Twitter account before it went viral.  He wrote in an e-mail to StinkyJournalism that he has “nothing to do with either the ‘Lord of the Rings’ or ‘The X-men’ and I have no connection with Stonewall.”

Gandalf and Magneto are two characters McKellen has played in the movie series for Lord of the Rings and X-Men, respectively.

In the background of both pictures, one can read part of the shirt on a man standing behind McKellen.  The man’s shirt seems to read the same slogan “Some People Are Gay.” Another sign of doctored work spotted by Quigley was the typefont for “I’m Gandalf And Magneto” does not match the font for “Get Over It!”

Quigley credited the blog The Daily What with outing the fake photo.

McKellan was at a protest against Pope Benedict XVI, who was on his first state visit to the United Kingdom.  The BBC explained that the “demonstration” was “organised by campaign group Protest the Pope,” and that protesters were there for many reasons.

“They all had a variety of reasons for turning up – some wishing to take a stand for secularism, others supporting feminism or gay rights and those who were primarily angry with the Vatican’s stance on contraception and the way it handled sex abuse cases,” The BBC wrote.

The BBC also reported McKellen’s presence at the protest and documented his real T-shirt’s slogan, both in its article and with an image.

Stekelman wrote in response to an e-mail inquiry from StinkyJournalism that he did create the photoshopped photo for fun.  “I just found the idea of Ian McKellen wearing that T-shirt amusing. It wasn’t a hoax in the sense that I assumed everyone would know it was photoshopped. I often tinker with photos/news stories for the amusement of my followers on Twitter and they all know that they are fake.”

“Most of my twitpics are viewed by a couple of hundred of my followers, so I was more than a little astonished when it all went viral and suddenly hundreds of thousands of people were looking at the pic, many of whom aren’t familiar with my work so they assumed it was a real pic,” he added.  “As soon as I saw that people thought it was real, I clarified on twitter that it was a fake and that I was surprised anyone thought it was real because a) it’s not particularly well photoshopped and b) why on earth would Ian McKellen seriously wear that T-shirt to an anti-Pope rally.”

“There was no satirical point to the photoshopped pic, given that I’m a fan of Ian McKellen and his stance on the Catholic church and homosexuality. The whole experience has been an education for me in terms of how quickly misinformation spreads across the internet,” he added.

The Advocate, a gay and lesbian magazine printed in the U.S., Canada and part of the U.K., fell for the fake photo, Quigley reported.

The current picture on the Advocate’s website is the original, un-photoshopped picture, but the accompanying article features an “update” that “The BBC is running a photo of McKellen wearing the same T-shirt as everyone else attending the protest. The photo circulating on the Web appears to have been doctored. The new photo now appears here.”