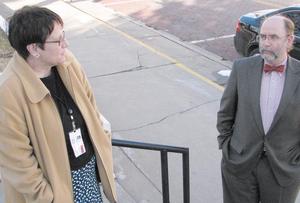 Dodge City Daily Globe reporter Claire O’Brien had her contempt charge and fine lifted when she appeared in court and testified about her jailhouse interview, the Associated Press reported in the Kansas City Star.

iMediaEthics has been following the case, and reported on O’Brien’s decision not to attend the first day of an “inquisition” trial.

O’Brien had been ordered to testify about her interview with Sam Bonilla, charged with murder and attempted murder, and to reveal an unnamed source she used for her Oct. 13 Daily Globe story about Bonilla. After deciding not to attend the hearing Wednesday, O’Brien had initially been fined $1,000 a day, we reported.

The AP reports Ford County Attorney Terry Malone told them that at Friday’s hearing “O’Brien apologized to the judge for not showing up at the earlier hearing, indicating she needed advice from another attorney. District Judge Daniel Love accepted the apology.”

The day before O’Brien appeared in court, her anonymous source revealed himself to the court, the AP writes, “[releasing] O’Brien from her promise of confidentiality.”

“I feel vindicated because my source stepped forward at the last minute,”

O’Brien says, explaining she would not have revealed the source’s name in court, and was prepared to serve jail time. She says she hopes her experience can serve as “an example to reporters of the power of trust that can develop between a source and a reporter.”

Frustrated by news reports that downplayed her role, O’Brien says, “The fact of the matter is that I had developed a plan that was the best I could come up with… I wasn’t ‘saved,’ by a lawyer…In the end, I proved that a reporter keeping her word can move mountains.”

According to the AP, O’Brien’s case has spurred action to move forward on creating a shield law for Kansas journalists.  They quote Doug Anstaett, executive director of the Kansas Press Association, who says “If reporters don’t have the ability to talk to people anonymously, valuable investigative reporting will go away.”