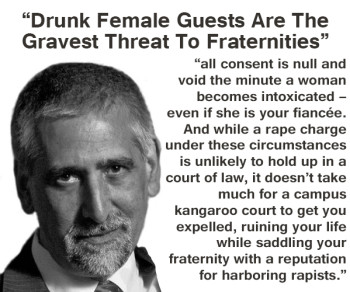 “Drunk female guests are the gravest threat to fraternities.”

Believe it or not, that was an actual headline for an online Forbes column.

The author, Bill Frezza, has since been fired from Forbes, iMediaEthics has learned.

“Mr. Frezza’s post was removed from Forbes.com almost immediately after he published it,” Forbes spokesperson Mia Carbonell told iMediaEthics by e-mail. “Mr. Frezza is no longer a contributor to Forbes.com.”

“Until several hours ago I was a paid contributor to the opinions section,” Frezza told iMediaEthics by e-mail.

Frezza said no one at Forbes reviewed his post before publication and it was removed after “about 10 seconds.”

“My editor correctly removed my column because the subject matter did not fit the opinion section and the picture was in poor taste,” Frezza told iMediaEthics.

Frezza argued it’s not the fraternities that host parties that are responsible for any injuries, deaths or issues but instead the “drunk female guests” who are to blame.

Frezza challenged that characterization by iMediaEthics, writing in an e-mail responding to our question about his article suggesting drunk women are to blame is “a mischaracterization of my column.”

“Please do not incorrectly imply that I said that drunk women are to blame for ANY problems fraternities might experience. This is not good journalism,” he wrote to us.

When asked for a response about his column being criticized for victim-blaming, Frezza wrote:

“I believe this is a complete mischaracterization of what I wrote, an example of ‘framing’ that does a disservice to rational dialogue and distracts from the real problem, which is binge drinking and pre-gaming. My primary goal is to keep anyone who sets foot in our chapter house safe, and keep people out who are going to cause trouble.”

When asked how many complaints he had received, Frezza wrote to iMediaEthics: “Are you kidding? The swarm is attacking in full force.”

Despite being fired, Frezza said he stands by his column. He told iMediaEthics:

“I stand by every word I wrote and it appears that I have kicked off a national conversation on this subject, which was my goal. Most people have no idea what is going on on college campuses these days due to the ill-advised raising of the drinking age from 18 to 21, forcing so much of it to go underground. I have complete confidence that the men at the fraternity I mentor will always comport themselves properly. Any woman on campus knows that she is safe in our house, which is perhaps why some choose to behave with such reckless abandon. You have no idea what a predicament this has put our colleges and well behaved fraternities in. Unless and until we begin holding individuals accountable for their own behavior, and not institutions, my headline says it all.”

Frezza, whose author bio says he writes about “the decline and fall of entitlement democracy” and is the president of his MIT fraternity’s alumni house corporation, the Beta Foundation, made his comments in light of the suspension of MIT’s Lambda Chi Alpha fraternity during an investigation into a party where a female guest fell out of a third-story window.

“As recriminations against fraternities mount and panicked college administrators search for an easy out, one factor doesn’t seem to be getting sufficient analysis: drunk female guests,” Frezza wrote.

Frezza claimed “female guests” are problematic because fraternities have so many rules and policies for parties and enforce them. Therefore, under his logic, it couldn’t be the fraternities causing problems. He also called for the drinking age to be lowered to 18.

“We take the rules very seriously, so much so that brothers who flout these policies can, and will, be asked to move out,” Frezza wrote. “But we have very little control over women who walk in the door carrying enough pre-gaming booze in their bellies to render them unconscious before the night is through.”

The column has since been taken down, with the link leading to an error page. Other highlights:

Frezza said drunk male guests at the parties are usually not allowed in the front door but drunk women are:

“Yes, boozed up males also show up at parties, sometimes mobs of them disturbing the peace on the front steps. But few are allowed in, especially if they are strangers. Plus, it remains socially acceptable for bouncers to eject drunk and rowdy males because our society rarely casts them as sympathetic victims, as opposed to the irresponsible jerks that they are. In our age of sexual equality, why drunk female students are almost never characterized as irresponsible jerks is a question I leave to the feminists. But it is precisely those irresponsible women that the brothers must be trained to identify and protect against, because all it takes is one to bring an entire fraternity system down.”

Frezza even created a list of tips for fraternity members trying to handle women including not letting drunk women into parties no matter “how pretty or flirtatious” they are, having bouncers and fraternity members kick “out of control” female guests out of parties and not taking “a drunk female guest to your bedroom — even if you have a signed contarct indicating sexual consent,” because you might get expelled for rape.  Frezza wrote:

“Based on new standards being promulgated on campus, all consent is null and void the minute a woman becomes intoxicated – even if she is your fiancée. And while a rape charge under these circumstances is unlikely to hold up in a court of law, it doesn’t take much for a campus kangaroo court to get you expelled, ruining your life while saddling your fraternity with a reputation for harboring rapists.”

On Twitter, Frezza posted a meme with his advice, “Drunk Females Greatest Threat.”

Frezza has tweeted about the reaction to his article writing

Let the conversation begin. I have donned my asbestos underwear. Please read the original not just the attacks. http://t.co/kemTJfydRX
— Bill Frezza (@BillFrezza) September 24, 2014

The swarm is attacking. First time I’ve been on the receiving end of this. No attempt at rational discourse. SILENCE THE BLASPHEMER!

UPDATE: 1:06 PM EST  This story was posted at 1:06. The original timestamp was incorrect