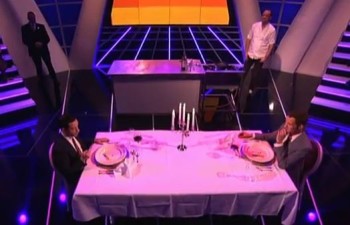 See above a screenshot from Proefkonijnen's December segment in which the two hosts reportedly ate each others' flesh. (Credit: YouTube, "TVBNN," screenshot)

According to numerous international news reports, two Dutch TV hosts, Dennis Storm and Valerio Zeno, reportedly “ate each other’s freshly cooked flesh” during a December program of their show Proefkonijnen (Guinea Pigs).  iMediaEthics wondered upon reading these reports: Is this the lowest of ways to drum up publicity and ratings, or was this segment a hoax?  The Atlantic Wire called it a “pretty brazen ratings stunt” and described the show as a “sort of cross between Fear Factor and Mythbusters.”

“The two presenters of TV show Proefkonijnen (which means guinea pigs or test rabbits) brought reality television to a whole new level when they ate each other’s freshly cooked flesh.  Dennis Storm and Valerio Zeno were earlier filmed while they were under local anaesthetic as a surgeon cut a piece of their muscle at a clinic.

“Storm watched as flesh was cut from Zeno’s abdomen, and Zeno returned the favour when muscle was cut from Storm’s bottom.  A chef was brought in to fry their flesh on their TV show, in front of a studio audience.

“Zeno and Storm then sat for a candlelit dinner – complete with wine – to dine on each other’s muscle.  Storm told ABCNews in the United States that the muscle was cooked to medium-rare in sunflower oil without seasoning.”

The story was picked up by a variety of news outlets, including a Dec. 20 Sky News report, a Dec. 21 Daily Telegraph Dec. 21 report, a Jan. 14 Daily Mail article, a Jan. 8 Daily Herald article, a Dec. 22 MSNBC report,

MSNBC’s report noted that “Some media, citing BNN, reported that the stunt, shown on science program Guinea Pigs, was a hoax.  But BNN press officer Thijs Verheij told Reuters that BNN had never said it was a hoax and that the flesh-tasting really took place. Zeno showed Reuters a scar on his belly where his flesh was removed.”  Politiek.blog.nl also reported that “Many thought it was a hoax” but Zeno and Storm maintain it was a real event.

According to the UK Metro, BNN representative Thijs Verheij is quoted as saying: “Some people believe it’s a hoax, yes, but I can tell you it isn’t.”

BNN’s Marloes van Grotel told iMediaEthics by e-mail that the segment was neither a hoax nor a publicity stunt.  We also asked what prompted the segment and what its purpose was.  van Grotel wrote:

“This program (Proefkonijnen) is all about sober answers to drunk questions. Everything is possible in the program for scientific research, except hurting someone on purpose. Hosts Dennis and Valerio looked for answers. This was one of the crazy questions from Valerio after seeing the movie ‘ Alive’. What is the taste of human flesh?”

Dutch newspaper De Gelderlander reported  that Dutch politician Maarten Haverkamp questioned Marja van Bijsterveldt, the Dutch minister of Education, Culture and Science,  about whether the stunt was for real.  We wrote to van Bijsterveldt’s office asking for more information.

According to press officer Sander van Dam from the Ministry of Education, Culture and Science, van Bijsterveldt “has responded to that questions that Mr. Haverkamp raised.”  The minister’s response is in Dutch, but van Dam summarized the “essence” of van Bijsterveldt’s response as “No Dutch law seems to have been breached with the cannibalism segment and therefore the public prosecutor sees no reason to prosecute. Whether the item is in good taste is the responsibility of the broadcaster.”

BNN’s van Grotel noted that “Dennis, Valerio and BNN are not suable according [to] the government.”

KGET’s webmaster Scott Herrick explained that the story was published through a content provider, Inergize Digital Media,and that the report expired automatically 30 days after its Dec. 26 publication.