Dying Woman Photo: Should Mail Online, Mirror have published it? 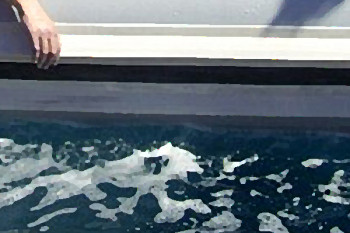 Detail of photo of the attempt to save Jennifer . (iMediaEthics illustration Credit: AP)

Was it OK for the Mail Online, the Mirror, the Associated Press and National Post to publish a photo of a woman who was dying?

Last month, the Mail ran a photo of Canadian woman Jennifer Karren, who died after the tour boat she was on in Mexico crashed into a whale.

A March 11 article was titled “Pictured: The moment rescuers desperately tried to save Canadian tourist, 35, who was killed when her boat was hit by a breached WHALE in Mexico.” The first photo shows Karren lying on the side of a boat with what appears to be a shirt covering her face and passengers administering CPR.

The other photos include a photo from Karren’s wedding, a photo of the boat, and a photo of a whale.

The caption states: “Freak accident: An image shows a woman receiving CPR aboard a small boat after she was injured by a breaching grey whale near the beach resort of Cabo San Lucas, Mexico. The woman later died in hospital.” The photo is credited AP.

Below see a screenshot of Daily Mail commenters criticizing the publication of the photo.

“I do think Mail Online was wrong to publish the photograph regardless of the fact that a government agency (in a country where such images do get shown) released it,” Greenslade wrote, noting that it would invade the victim’s privacy and distress her friends and family without “any public interest reason.”

iMediaEthics searched for other outlets using the image and found that the Mirror in England and The National Post in Canada used the photo showing the dying Canadian woman. The photo came from the Associated Press.

The AP published the photo crediting it to AP and PROFEPA.  PROFEPA is a government organization the Procuraduria Federal de Proteccion al Ambiente.

iMediaEthics has asked the AP, the Mail, the Mirror and the National Post why it decided to publish the photo.

Julie Traves, the deputy editor for National Post, told iMediaEthics by e-mail: “The key thing in cases like this is editorial judgment to determine whether anything we run – in print or photography – is using details of a death gratuitously or to move a story forward.”

Guardian blogger Greenslade criticized the Mail for the photo, explaining that there is a “convention in Britain of not publishing pictures of dying and/or dead people” but it “usually only applies to British people.”  Greenslade offered other considerations for bucking the norm against publishing photos of dying people, including that the media regulator IPSO doesn’t “explicitly ban the use of images of the dead and dying,” and  “News outlets may feel that the “official” release of pictures by a government agency provides them with a reason/excuse to carry them.”

iMediaEthics has asked Greenslade why he focused on the Mail given that it wasn’t the only UK publication to use the photo, pointing him to the Mirror’s coverage.

Dying Woman Photo: Should Mail Online, Mirror have published it?