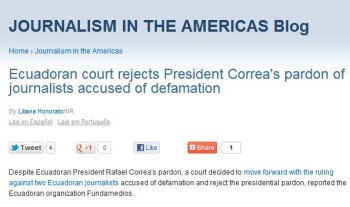 Ecuador’s President Rafael Correa pardoned journalists he successfully sued for libel in February but the pardon won’t be accepted by the court, the Knight Center for Journalism in the Americas reported.

According to the Knight Center, the court is going “forward with the ruling against two Ecuadorian journalists” Juan Carlos Calderón and Christian Zurita, and found that Correa’s “pardon does not put an end” to the pair’s libel.

In that case, as we wrote, the two journalists reported in a book on government contracts Correa’s brother had obtained.

Knight Center added that: “According to the journalists’ lawyer, Ramiro Aguilar, when the president offered the pardon, his lawyers already knew that the court would reject the pardon.”

Correa also pardoned journalists from El Universo who were sentenced to a total $40 million fine and jail time over a libel case.  The newspaper’s February 2011 column labeled Correa a dictator and questioned “an army raid to rescue [Correa] from striking policemen,” as we wrote at the time.  We have written to El Universo to see if this news about the pardon will affect its journalists’ pardon.