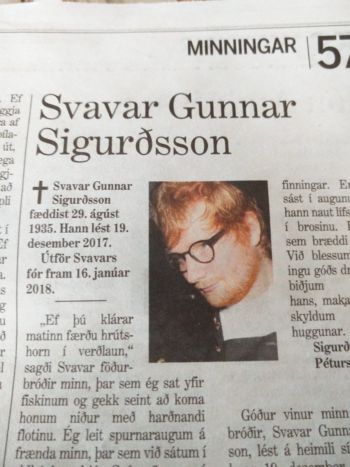 Ed Sheeran isn’t dead, and he wasn’t the victim of a death hoax. But, Icelandic newspaper Morgunblaðið published a photo of the pop singer with the obituary of a local Icelandic man, likely confusing many readers, music site Spin reported.

According to the Sun in England, the obituary in Morgunblaðið (Morgunbladid) was for an 82-year-old man who worked for Volvo named, Svavari Gunnari Sigurðsson.

iMediaEthics has written to Morgunblaðið to ask how the error occurred and how many complaints it received.

Hate to break it to u but Ed Sheeran is dead. It also turns out he is a 82 year old Icelandic man called Svavar. Ed Sheeran was apperantly only his stage name…. #ripsvavarsheeran pic.twitter.com/gxXuccmU2h