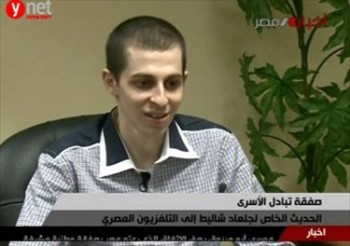 See above a screenshot from Amin's interview with Shalit. (Credit: YNet, screenshot)

Egyptian journalist Shahira Amin has been criticized for her interview with Israeli soldier Gilad Shalit, YNet News reported.  According to YNet, Shalit didn’t have a choice to be interviewed.

According to YNet, Amin interviewed Shalit for Egypt’s “national television station,” “moments after he was released from Hamas captivity.”  Shalit is an Israeli soldier who, after five years in prison,  “was freed [Oct. 18] in exchange for 1,027 Palestinian prisoners,” according to the Associated Press.

CBS News reported that  the interview was described as “shocking” by Israeli officials.  Further, CBS News described Shalit as “gaunt, sallow and uncomfortable looking” and that he “awkwardly answered questions.” While the interview began in English, Amin later switched to Hebrew, according to Haaretz.

Amin told Haaretz that “she had to stop the interview several times” and “took a break” because of Shalit “was exhausted.”  Further, she is quoted as saying she had independence in her interview:

“It’s true that he was brought in by armed Hamas men, but in the room itself there were only Egyptian intelligence people. They didn’t intervene, and neither did the Hamas men.

“I say this with complete authority and responsibility: I asked Gilad if he was willing to be interviewed and he said he was. If he’d answered that he didn’t, I wouldn’t have conducted the interview.”

Amin’s interview has also been criticized and accused of featuring propaganda.   YNet, for example, described Amin’s interview as “crude” and having “featured heavy pro-Egyptian and pro-Palestinian propaganda” and the BBC reported that Amin suggested Shalit could give Egypt “credit” for his release. See part of the interview here.

Amin told Haaretz that “she wrote the questions herself,” indicating that Egyptian TV and Hamas didn’t infringe on her independence in the interview.

Haaretz and CNN noted that earlier this year, she stepped down as Nile TV’s deputy CEO because of “network censorship” by “the Mubarak regime.”