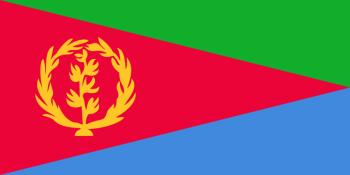 The flag of Eritrea (Credit: WIkipedia)

“This report is a hoax. Eritrea’s Penal Code does not permit polygamy,” the Eritrea Ministry of Information told iMediaEthics by e-mail. Eritrea is bordered by Ethiopia and Sudan.

The satire story came from Kenya’s Crazy Monday, the BBC reported. “‘Crazy Monday, which is published by the Standard newspaper, is well known for its focus on scandalous stories and gossip as part of an attempt to attract a younger readership’, says Mathias Muindi from the BBC’s media monitoring service,” according to the BBC.

The satire story was headlined “Eritrean men ordered to marry two wives or risk jail.” It was re-published by Zimbabwe’s New Day.  The article said: “Kenyans have received the news of mandatory polygamy by men in Eritrea with a mix of bewilderment and excitement.” The story further said, “The Standard could not immediately authenticate the document nor the translation and it was not clear why the statement was not in the other two national languages, Tigrinya and Tigre,” and only in Arabic.

Sahara Reporters posted this editor’s note at the bottom of its article reporting that the Eritrea claim was false. “Editorial Note: A previous story carried by SaharaReporters reporting a Eritrean law requiring men to marry two women was false and has been corrected.” The site appears to have unpublished the original article. iMediaEthics has written to confirm.

Media frenzy to parrot this ludicrous, fabricated & trite story of the Mufti's presumed religious decree on mandatory polygamy is appalling

iMediaEthics wrote to The Standard for more information but our e-mail bounced back.