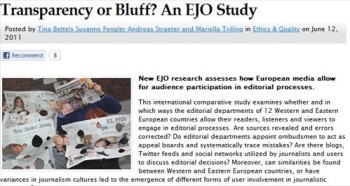 The European Journalism Observatory released a new study on the public’s involvement in ‘editorial processes” in 12 European countries.

The study’s overview noted that ombudsmen in European media outlets are “rare.” While having blogs to explain editorial decisions isn’t expensive, it is “very time-consuming.”  A “few” studied media outlets did have them though.

The EJO report studied corrections, ombudsman, reader engagement, and more at the various editorial departments.  In each of the twelve countries (Germany, England, France, Ireland, Italy, Latvia, Austria, Poland, Portugal, Sweden, Switzerland, and Hungary), the EJO looked at the websites of a weekly newspaper, the three highest-rated broadcast news stations, and the three highest circulation newspapers from “the three largest publishing houses.”

The study also noted that while media outlets could easily boost transparency by posting their ethics codes, “it is only in the Portuguese media that this seems to have become a norm.”

Read more about the study here.