EVEN FACT CHECKERS GET THE BLUES: Author Tom Robbins not writing for Village Voice 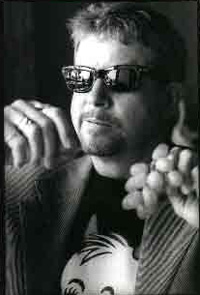 This man does not write for the Village Voice

The latest issue of the Village Voice announced that Tom Robbins had been given a new weekly column. Having just finished the novel Fierce Invalids Home From Hot Climates, I looked forward to seeing the reigning Zen master of American fiction in the role of investigative journalist. Even though Robbins had been a longtime contributor to the Voice, this would give his fans an opportunity to get a weekly fix.

His first contribution in the new column, a piece titled “Mike Bloomberg, Free at Last,” heightened my anticipation. The article called Bloomberg out on his hypocritical remarks that neither “national party stands for anything” by pointing out that he contributed $1.5 million to the G.O.P. — per Robbins, “a party he knew to be engaged in existential nothingness.” In that turn of phrase, I found the same humor, cheek, and cosmic sense of the absurd that delighted me in several of his novels.

I had to find out more, and called the offices of the alternative newsweekly to get some questions answered. Doesn’t Tom Robbins live in Seattle? How does he, for example, from afar, investigate the inner workings of New York’s City Hall? Does the Voice pay for his flights, or do researchers send him the information while he provides the dynamic prose? What so fascinates this famous West Coaster with New York’s political scene?

At this point, Village Voice press rep Maggie Shnayerson mercifully interrupted my line of inquiry before I asked any more stupid questions. She gently told me that the novelist and the investigative reporter were different Tom Robbins-es, and explained, “Tom has become the resident expert on labor unions and city politics and machinations behind the scenes in New York.”

Clearly, I should have swept my ignorance under the rug, and shelved the article. But with the wisdom of “that” Tom Robbins ringing in my ears, I decided to “Embrace failure! Seek it out. Learn to love it. It’s the only way any of us will ever be free.”

Apparently, though, my query caused a stir. Shnayerson recognized Art Science Research Lab’s media criticism blogs and interjected uneasily, “What are you guys thinking of? I’m looking at your website, and it looks to me like you guys are looking for issues with reportage.” When I explained that it was just the inquiry of a misguided fan, she said, “Not to worry. Should you have any need to get in touch in the future – I hope you won’t! – go ahead and give me a call.”

EVEN FACT CHECKERS GET THE BLUES: Author Tom Robbins not writing for Village Voice