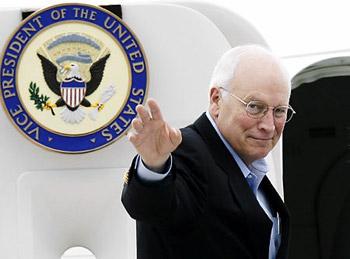 As the Bush administration prepares to exit the White House, some news outlets have become remiss in their obligation to provide unbiased coverage of the outgoing presidency.

In the online edition of today’s New York Daily News, the main picture was of Vice President Dick Cheney with a caption across it reading “Don’t Let the Door Hit You.” The photograph was a teaser for columnist Mike Lupica’s piece critical of the Vice President, which ran next to the headline ” I’ll be thrilled to see you go, Dick.” It was the first content link provided on the page, thereby leaving the reader with the impression that between the placement of the picture and the column, it was the top news story of the day. The layout ran until about noon when it was moved below the top news although still on the main page. It was also directly under the word news. “The ‘Don’t Let The Door Hit You” initially splashed across the picture vanished without explanation.

While it is far from debatable that Cheney is unpopular with the public and that a columnist has every right to ruminate on this, the ethical implications of the Daily News running this item in a slot where a reader would expect to find the single most important news of the day are concerning.

Lupica’s column would have never taken similar billing in the print edition, and in fact, it did not. The piece ran on page 6 of the column, next to a news story covering caustic remarks made by Cheney on Fox News Sunday concerning his successor. The print version was also not teased anywhere else in the paper, unlike its online counterpart.

Although the news story was featured in the online edition, it did not run on the home page as the column did. It was featured by clicking the news tab and ran as the third story.

Additionally, the print version of the news story featured a graphic with a picture of President George Bush and a countdown until his last dayn office. As no stories on either page of the spread were about Bush, it is questionable as to the intended message of posting the countdown in the paper. (An online photo gallery–“George W. Bush: The lamest duck ever?” even stacks the deck by selecting unflattering photos in order to openly mock the president).

Even lame ducks deserve fair coverage. Anything less is quackery.