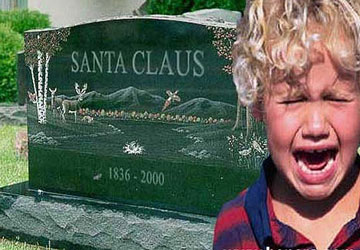 Chicago Tribune's web site produced a high-traffic photo gallery, titled, "Awkward Tombstones" that turned out to include the fake photo shown above. Ironically, Poynter Online, inadvertently republished the same fake photo in an article that featured the possible perils of using free images from social sharing sites, like Flickr.

Will Sullivan’s article in Poynter Online accidentally published a fake photo as part of a report about media outlets aggregating free content from social media sites.

As a cost-cutting measure, newspapers like the Chicago Tribune, are using free images generated from unknown sources. Flickr, a site where people share their photographs, allows media outlets to bundle these free images into high traffic photo galleries on their web sites.

Ironically, Sullivan’s article featured the possible problems in ownership –but not authenticity–when publishing photographs of unknown origins. It was in this report, “Tribune Interactive Creates Photo Galleries Using Creative Commons Images from Flickr ” that Poynter republished a photo from one of the Tribune‘s high-traffic galleries that resulted in their becoming an object lesson for their own inquiry.

Poynter’s Steve Myers, later writes in a separate, semi-confessional post, “The photo, of a crying child in front of a tombstone of Santa Claus, was included in a gallery called ‘Awkward Tombstones…’ I thought the photo looked odd, so I asked Sullivan about it, and he quickly found a Snopes.com item debunking it. (According to Snopes, the photo of the boy was a stock image, and the site showed a billboard that used the same one.)”

He continues, “Brandi Larsen, director of content for Tribune Interactive, took the photo out of the gallery after I asked her about it. ‘We just would never run doctored photos, and we’ve taken it down, and we will look into how we handle Flickr and Creative Commons in the future,’ she said.” 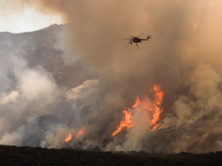