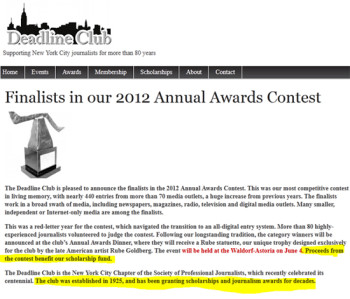 Only the proceeds from the entry fees paid directly to the Deadline Club Foundation, pay for scholarships--not the lion's share of the monies paid for dinner tickets. (Credit: Deadline Club, screenshot, highlight added).

Exclusive: Since January 17, iMediaEthics has tried, and failed, to get the Society of Professional Journalists (SPJ) New York chapter, The Deadline Club, to answer two simple questions about its annual contest, billed as “one of the city’s most prestigious journalism awards.”

The Club’s Annual Awards Contest is open to New York (city) area media. The number of categories and the entry fee change year-to-year, but in 2012 journalists could compete for 32 awards, including for the Daniel Pearl Award for Investigative Journalism. Each entry this year costs $70, and applicants pay an entry fee for each category — so if you’d submitted the same story in three categories, you’d have to pony up $210. The money adds up quickly.

Tarquinio, who is a staff writer for SmartMoney magazine in addition to being Club president, said in a Feb. 22 phone interview that there are two organizations — a Deadline Club and a Deadline Club Foundation — that run the annual awards contest and dinner event. The “sole purpose of the Foundation is to give these scholarships,” she said.

Note: The Deadline Club — not the Foundation — listed its Annual Awards Dinner as a charitable event on CharityHappenings.org in 2010. See screen shot below.

The Club lists its annual awards dinner as a charitable event, even though it’s not. Only the proceeds for the entry fees given to the Foundation are charitable contributions.

With 32 categories clearing $70 per entry, a successful contest should generate tens of thousands of dollars for scholarships. Yet, for many years the club awarded only a pair of $1,000 scholarships. Last year, that number increased to three scholarships at $2,000 apiece.