Pakistani Christians Not Fleeing After Girl Jailed For Blasphemy, Muslims & 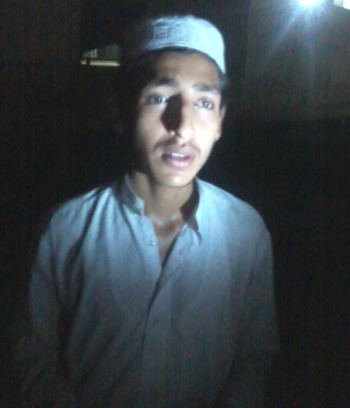 Muhammad Waseem Ahmed, the dweller of Mehra Jaffar village and the owner of the house in the area where media has falsely reported violence against Christians. He told iMediaEthics "We fail to get the media hidden agenda behind this biased reporting and presenting the wrong facts to the public."(Credit: Malik Ayub Sumbal)

ISLAMABAD, PAKISTAN: The Pakistani dwellers, Muslims and Christians of Mehra Jaffar village in the suburbs of Islamabad, are disgruntled about the biased and inaccurate reporting by international and local media.

A young Pakistani Christian girl, Rimsha Masih, approximately 14 years old with diminished mental capacity, was jailed with the charge of blasphemy after being accused by a Muslim neighbor of burning the pages from the Holy Koran, as the story goes. Last week, reports by news outlets including Voice of America and the Washington Post, claimed that the accusations against the girl prompted her Christian neighbors to “flee their homes.”   And this past weekend, a Muslim imam, Khalid Jadoon Chishti, was arrested and accused of “stashing pages of a Quran” in the girl’s bag to make her look guilty.

But, iMediaEthics’ Pakistani correspondent, Malik Ayub Sumbal, went to Rimsha’s neighborhood this weekend, photographed the area, and interviewed residents.  Ayub found that wrong facts have yielded an international sensation that both local Muslim and Christian residents told iMediaEthics has been harmful.

The Christians Did Not Flee

The house where Rimsha Masih lives is located less than 300 meters from the Ameenia Mosque. Shown below is the door of her family’s house taken at night. The door and the building itself have no marks and are unharmed.

In the latest wrinkle of what has become an international media storm, Qari Muhamad Khalid Jadoon (also referred to in the media as Khalid Jadoon Chishti), the prayer leader of the Mosque, was arrested by the police and sent on the Judicial remand for 14 days. He was accused of falsifying evidence by adding burned pages into the ashes provided by Rimsha Masih’s accusers that was used to support a blasphemy charge.

iMediaEthics’ visit to the village Mehra Jaffar, located outside of Islamabad, on Sunday also included going to the Ameenia Mosque, now in the center of the controversy because its imam has been arrested.  See below a photo of the mosque.

The entrance of Ameenia Mosque of Mehra Jaffar, Islamabad, the mosque of the accused Prayer leader, Qari Muhammad Khalid Jadoon, who has been sent to judicial remand for adding verses in to ashes carried by Rimsha Masih. The dwellers gathered here Sunday night to strategize for Jadoon’s release.  (Credit: Malik Ayub Sumbal)

Christians are the main residents in the neighborhood around the mosque. Many Christians, in fact, rent their homes from Muslims. The media has reported that a mass exodus of Christian families was seen in this area soon after the Koran-burning incident, but local Christians and Muslims have both rejected these claims in interviews with iMediaEthics.

“The whole community is now threatened by extremists wanting to burn down the village. 2-300 people have left their homes and are in hiding due to threats from mobs declaring that they will soon attack the village. APMA has been providing for their food expenses since many have left their residence. Dr. Paul Bhatti along with APMA members has so far controlled the situation by reporting the incident to the police.”

The Washington Post was among many news outlets that published the Associated Press report that stated: “Christians in her Islamabad neighborhood left the area en masse as soon as the accusations surfaced, fearing retribution from their Muslim neighbors as the case has inflamed religious tensions in this Muslim majority country.”

And CNN reported that Tahir Naveed Choudhry, a lawyer in Rimsha’s legal team, stated, “The case has already had a severe effect on people in the area. Hundreds of Christian families have had to leave the area for fear of violence.”

But, Muhammad Waseem Ahmed, owner of a house in the area rented to a 48-year-old Christian woman named Rukiya Masih, told iMediaEthics:

“The media is reporting about the migration of the Christians and the Muslim harassment towards them after this incident in this area which is totally wrong and baseless, based on their assumptions. They are still living here and even one of the Christian families is our tenant. We fail to get the media hidden agenda behind this biased reporting and presenting the wrong facts to the public.”

Christian neighbor of girl speaks out

Rukiya, standing on her doorstep, told iMediaEthics: “I have been residing here for the last 15 years and when the incident of Rimsha took place, I was in Islamabad as I work in the Bungalows as a cleaner and I listened to the news from a local TV channel breaking news bulletin.” She stated, “I rushed towards my house because news channels said that the Muslim villagers attacked Christians after the burning of the Koran verses by Rimsha, a Christian girl.”

Rukiya continued: “When I reached here, my kids were scared, but the owners of the house asked me to stay cool and calm, no one can dare to touch you.”

She said since the day that the media reported on the violence here, nothing has happened to her or to other Christians. However, she knows that the troubles for her former neighbor girl, Rimsha, have now evolved into an international incident.

iMediaEthics found that none of the houses of any Christian residents have been damaged by the locals after the incident. Even the house of Rimsha was safe and sound, though it has been locked and the family has temporarily moved to an undisclosed location.

Zulfiqar Ali is another local resident who blasted the media for inaccurately reporting on Christians fleeing and Muslims damaging their houses. Ali told iMediaEthics: “The local and international media has reported by trashing the facts and figures on this issue. They have sensationalized this blasphemy issue and to create maximum rift among the Muslims and Christians.”

Ali stated, “The journalists who have reported on Rimsha spoiled the prestige and dignity of the pen and ink.”

Even a leading Pakistani newspaper, The Express Tribune, the partner of the International Herald Tribune in Pakistan, has written the girl’s name as “Rifta.” The Tribune wrote, “On the eve of Ramazan 27, Rifta was playing outside her house, opposite sector G-11 in Islamabad, when she was allegedly seen burning and dumping the pages of the Qaida into a bin.”

With such confusion over the name of the girl, of whether or not she is Rimsha or Rifta, many of the other facts reported by the media in this case are easy to disbelieve.

When iMediaEthics was on the scene, the Maghrib prayer comprised more than 50 prayers, gathered in the Ameenia Mosque, all discussing the recent incident in which the police picked up the prayer leader, Qari Muhammad Khalid Jadoon.

The courtyard of the Ameenia Mosque where the dwellers gathered on Sunday eve at Maghrib prayer to discuss the arrest of Qari Muhammad Khalid Jadoon and the media’s biased reporting on the blasphemy incident headed by the Lambardar, Haji Malik Banaras. (Credit: Malik Ayub Sumbal)

When this correspondent entered the mosque, Haji Malik Banaras, who is a Lambardar of this village, was addressing the gathering on the incident of arrest of Qari Muhammad Khalid Jadoon and unjustified media reporting. [Editor’s Note:  The title of ‘Lambardar’ started in the British Raj and was available only to a powerful personage; Related terms: Wise man, Village Head, Zamindar]

Malik Banaras stated: “We will have to gather the villagers and to take the oath on Holy Quran that who had seen Qari Muhammad Khalid Jadoon by stashing pages of Holy Koran on the Rimsha hands to make it accused.”

Malik Banaras also criticized the sensational reporting of media who has created the hype and panic in the locality against Christians that they are in severe risks of their lives by the Muslims and fleeing from this area.

The crowd of the villagers decided to gather in the same Mosque to decide about prayer leader Qari Muhammad Khalid Jadoon, now snared in this case by allegations by the Mosque treasurer, Qari Zubair. Zubair himself has been embroiled in an ongoing personal financial dispute with the prayer leader to get his share of the Nikah registrar money collected from the people. Nikah, or Nikkah, is the matrimonial contract between a bride and bridegroom within Islamic marriage.

Google map of the dwellers area just outside of Islamabad, where the controversy is taking place.

Notes: We are naming the young girl at the center of this story.  Rimsha’s lawyer, Tahir Naveed Choudhry, did not keep her name private. iMediaEthics spoke with him and he only wanted her photo secret for security purposes.

All quotes have been translated from Urdu.