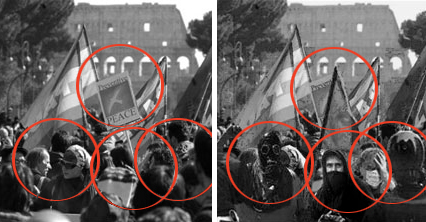 Live Science states, "A photograph of a peaceful 2003 anti-war protest in Rome is doctored so that the added elements make viewers recall the event as more violent." Note: the photo on the left is the original before Photoshopped changes were made. The image on the left,shows alterations. The changes include removal of the peace sign and the additions of menacing looking figures with obscured faces.

“Those who viewed the altered images of the Rome protest recalled the demonstration as violent and negative and recollected more physical confrontation and property damage than actually occurred.

“Participants who viewed the doctored photos also said they were less inclined to take part in future protests, according to the study, detailed in the journal Applied Cognitive Psychology.”

“UC Irvine psychologist Elizabeth Loftus, who designed the study,” said “With the addition of a few little upsetting and arousing elements in the Rome protest photo, people remembered this peaceful protest as being more violent than it was, and as a society we have to figure how we can regulate this.’ “