Fauxtography is Nothing New: Editor of The Mirror Forced to Step Down Over Fake Photos in 2004

Fauxtography is Nothing New: Piers Morgan Fired in 2004 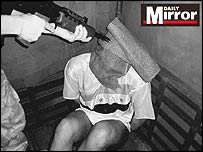 Even though it seems a recent phenomena to print or broadcast fake photos of the conflict in the Gaza Strip, fake photos are nothing new to war coverage. The cases go back to 2004, and possibly further. Here is one case that iMediaEthics readers may not remember.

Daily Mirror editor Piers Morgan was sent packing after he allowed hoax photos of British soldiers abusing Iraqi prisoners to run in the paper. The BBC News reported that once it was proven the photos were fake, the paper issued a statement saying, “it had fallen victim to a ‘calculated and malicious hoax’ and that it would be ‘inappropriate’ for Morgan to continue.”

In proving that the photos were staged, QLR “Brigadier Geoff Sheldon said the vehicle featured in the photographs had been located in a Territorial Army base in Lancashire and had never been in Iraq. He said the QLR’s reputation had been damaged by the Mirror and asked the newspaper to apologise because the evidence they were staged was ‘overwhelming’.”

Fauxtography is Nothing New: Piers Morgan Fired in 2004