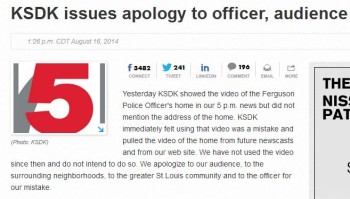 While the Gannett-owned station didn’t list his address, they did show viewers the house.  KSDK apologized for its “mistake.”

In a statement on its website, the station wrote:

“Yesterday KSDK showed the video of the Ferguson Police Officer’s home in our 5 p.m. news but did not mention the address of the home. KSDK immediately felt using that video was a mistake and pulled the video of the home from future newscasts and from our web site. We have not used the video since then and do not intend to do so. We apologize to our audience, to the surrounding neighborhoods, to the greater St.Louis community and to the officer for our mistake.”

There was a rally in support of the officer, Wilson, outside the station August 17, the St. Louis Post-Dispatch reported.

The St. Louis Post-Dispatch also published a letter to the editor complaining about KSDK’s “careless journalism” and “meaningless” apology. The letter, from John Davis, reads:

“With all of the tragic events in Ferguson last week, it was totally senseless and irresponsible for television station KSDK (Channel 5) to show a video of the home of the Ferguson police officer. In their rush to be first, they hit a new low in TV journalism. This was careless journalism at its worst. Their after-the-fact apology is meaningless.”

iMediaEthics has reached out to KSDK’s station manager for comment.

UPDATE: 3:06 PM Station manager Marv Danielski told iMediaEthics by email: “We have made our apology and have nothing more to add.”