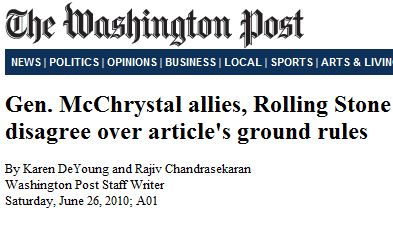 Firedoglake, the progressive political blog, wrote June 25 critiquing The Washington Post for not only publishing an anonymously sourced article, but also publishing a list of staff members –not by name but by job–that could help identify unnamed sources in Rolling Stone‘s profile of General Stanley McChrystal.

CNN also reported June 26  that “a source close to the general” said that the aides quoted with controversial statements in Hastings’ article haven’t ‘come forward’ and identified themselves.

StinkyJournalism found The Washington Posts’ attempt to speculate about the identity of Rolling Stone’s anonymous sources odd since Washington Post writer Ian Shapira recently opined that he didn’t like when journalists “out” each other’s sources.

Yet…The Washington Post’s June 26 article heavily relies on anonymous sourcing to report their claim that Rolling Stone freelance writer Michael Hastings broke agreed upon rules in his profile on McChrystal.  The profile led to McChrystal being “relieved of his duties.”

Bottom line: The Washington Post anonymous sources charge that Hastings reported information that was off-the-record; a charge which Rolling Stone editor Eric Bates denies.  (There have been no claims that StinkyJournalism can find regarding factual inaccuracies or misquotation committed by Hastings in his report. [Note: We have since found Threedonia.com’s June 27 article that cites an error. Go to our July 1 report here].)

CNN also sources “several military sources who personally know McChrystal” to address McChrystal’s character and “one military official who worked for McChrystal in Afghanistan” who claimed that the quotations used were off-the-record.

“The military official sympathetic to McChrystal” turned over an e-mail fact check to The Washington Post.  The Washington Post article wrote that the questions “contained no hint” of the story’s controversy and printed the whole e-mail’s questions.

The fact-check somewhat identifies the aides who are unnamed in Hastings’ article.  The LA Times reported that Hastings said he didn’t identify some of them by name because he “didn’t need to burn them.”

iMediaEthics is looking into several aspects of this case and will report again soon.

UPDATE: 06/28/2010, 11:22 AM EST:  iMediaEthics has updated and combined the first two paragraphs of this story to clarify that publishing the email communications with Rolling Stone–that contained 30 fact checking questions for the general’s staff–facilitated the possible identification of Rolling Stone’s unnamed sources.