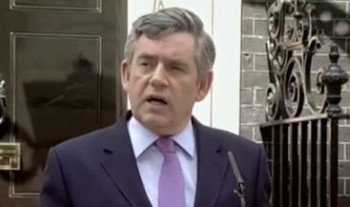 As we have written, last year Brown claimed that the Sun hacked medical records  to get the story, but the Sun dismissed the claims and said a member of the public tipped the newspaper off.  The BBC noted that Brooks “refused to name that source.”

During last week’s Leveson Inquiry into UK press standards and practices,  Brooks said the Browns “gave me permission to run” the story about the son’s cystic fibrosis.

Now, Brown denied that the Browns received a “satisfactory explanation” about how the newspaper learned of their 4-month-old son’s cystic fibrosis, which was “known to very few people,” according to the Guardian.

Brown said that he and his wife didn’t want the story out, but were “presented with a fait accompli” and just wanted to “minimise the damage.”  His statement reads in part:

“We were presented via the Treasury press office with the notification that the Sun had obtained information about our newborn son’s health a few months after his birth in 2006 and was preparing to run a story.  At no stage did anyone from the Sun ask permission to publish this story.”

Brown did note that his wife “did speak at length” with Brooks about the story, but it was to “ensure that reporting was not unduly negative about the prospect for her son’s health.”

The UK Independent on Sunday reported in a May 6 story information “that appeared to be based on [Andy Coulson’s] witness statement” for the Leveson Inquiry, in advance of Coulson’s appearance at the inquiry, Journalism.co.uk reported.

The Independent’s story reported that Coulson “held shares in News Corporation while he was David Cameron’s head of communications…when the Government was deciding whether to approve the company’s takeover of BSkyB.”  As we have written, Coulson resigned from Cameron’s office in January 2011 amidst new phone hacking charges against News of the World. He resigned as News of the World editor in 2007.

The Independent’s editor, John Mullin, defended the newspaper’s report and said the newspaper had independent confirmation of the story and “didn’t use the statement as a source,” according to Journalism.co.uk.

The Guardian noted that Mullin did say he read the evidence and said that “in retrospect, it would have been much better all round had I not read the statement.” He added that “I do apologise for the trouble this has caused the inquiry.”

Lord Leveson said May 14 that he doesn’t plan to “take any action” about reporting on leaked information, according to Journalism.co.uk.

We wrote in November when UK blogger Paul Staines posted a leaked witness statement on his blog Guido Fawkes before it had been officially released from the Leveson Inquiry.  Leveson at the time said he was “extremely concerned” about he leak and that:

“Witness statements are disclosed under strict confidentiality agreements in order that participants can prepare for the evidence; that confidentiality must be observed to maintain the integrity of the Inquiry.”