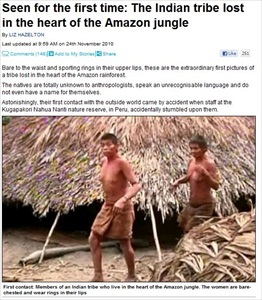 The UK's Daily Mail published a video that depicted members of a "lost tribe." (The Daily Mail, Screenshot detail)

At the end of last year, the UK’s Daily Mail reported the “discovery” of “an Indian tribe lost” in the Peruvian Amazon together with photos of various bare-chested “natives.”

The gist of the article was that their existence had only been recently revealed after a Peruvian government team was sent into the region and took photos in August 2009, according to the Daily Mail.  (See the Daily Mail story here.)

Although experts may agree that the people reported on by the Mail have little or no regular contact with outsiders, the way the story was sold and told was extremely misleading.

The people in the photos are Nanti and actually have been known about for many years. They live in southeastern Peru and are estimated to number between 130 to 300.

Some other Nanti have had intermittent contact with outsiders since the 1970s. They live in villages along the River Camisea and are estimated to number at least 250. FIRST CONTACT? The UK’s Daily Mail published a video that depicted members of a “lost tribe.” But check out what appears to be metal pots in the screenshot detail above. Such metal objects would not be manufactured by uncontacted “stone-age” people. (The Daily Mail, Screenshot detail)

How much do these sorts of errors really matter? The answer is a great deal. These errors and others and indeed the whole tone of the Mail’s article make the Nanti sound simple and stuck in the past. As Survival International, an organization I worked for until July 2010, has pointed out, this kind of portrayal, particularly if pejorative terms like “primitive”, “Stone Age” and “savage” are used, can be extremely harmful to indigenous people for many reasons, including making it easier for governments, companies and others to seize their land.

One of the few things the Mail did get right was this: indigenous people living without regular contact are extremely vulnerable because of their lack of immunity to outsiders’ diseases. Time and time again, huge numbers of people have been decimated following contact. Examples in the Peruvian Amazon include:

The Nanti themselves have already undergone a similar experience. According to a report by Peru’s Ministry of Health published in 2003, between 30% and 60% of some of the first Nanti to be contacted died during one ten year period.

The Mail is not alone in doing this kind of reporting. To find many more examples – and to challenge the editors and journalists responsible for them — join Survival International’s Stamp it Out campaign.

The Stamp it Out campaign has already led major UK papers The Guardian and The Observer to ban terms ‘primitive’ and ‘Stone Age’ to describe tribal people. Survival’s director, Stephen Corry, says, “Journalists all around the world need to understand that the use of these kinds of terms is not only inaccurate, but extremely harmful. They foster prejudices which lead directly to tribal peoples’ suffering.”

Read more about the Stamp it Out Campaign on Survival International’s website here.

David Hill studied anthropology at Oxford University and worked as a researcher at Survival International until 2010. The focus of his work has been promoting the rights of very isolated indigenous people and has included travelling to remote parts of Colombia, Peru and West Papua.