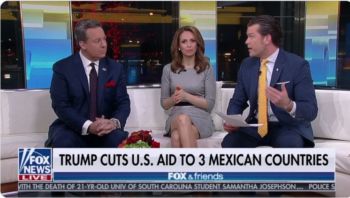 The graphic referenced the State Department cutting off foreign aid to the three countries, the Hill noted.

A Fox News spokesperson pointed iMediaEthics to its correction on air.

“Now we want to clarify and correct something that happened earlier in the show. We had an inaccurate graphic onscreen while taking about this very story. We just want to be clear, the funding is being cut off to the three Central American countries. We apologize for the error – it never should’ve happened.”