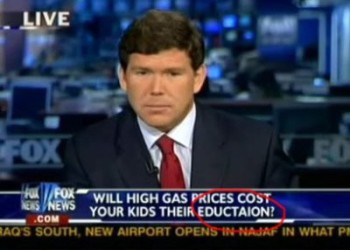 Fox News’ Bret Baier apologized Friday for reporting it was “likely” there would be an FBI Clinton Foundation indictment.

Baier had said Nov. 2 on Fox News, that FBI sources told him “barring some obstruction in some way, they believe they will continue to likely an indictment.” Real Clear Politics published transcripts of Baier’s two on-air interviews making the original claims.

According to CNN, after Baier originally made the indictment claim on Nov. 2, the next day, “NBC News, ABC News and CNN all reported that Fox’s assertion was not true.”

In his Nov. 4 on-air comment about his reporting, Baier noted “All the time but especially in the heat of election on a topic this explosive, every word matters, no matter how well-sourced.”

He went on to apologize for saying there would be an indictment and noted that there are “no digital fingerprints” showing Clinton’s e-mail was hacked. Baier said:

“That wasn’t just inartful, it was a mistake, and for that I’m sorry. I should have said they will continue to build their case. Indictment obviously is a very loaded word, Jon, especially in this atmosphere and no one knows if there would or would not be an indictment no matter how strong investigators feel their evidence is.

“It’s obviously a prosecutor who has to agree to take the case and make that case to a grand jury. We stand by the sourcing on the ongoing active Clinton Foundation investigation and are working to get sources with knowledge of the details on the record and on camera, hopefully today.”

See the full video below.