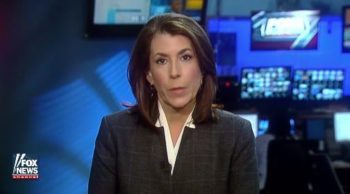 Radio host and Fox News political contributor Tammy Bruce apologized Tuesday for mocking an autistic child and calling him a “snowflake” during an appearance on Fox News.

In a May 12 segment during Fox News’ Tucker Carlson Tonight program, host Bill Hemmer showed a clip of Vice President Mike Pence standing in front of a group of military children. Pence motioned and his arm accidentally hit the child. After Pence’s comments, the child then went up to Pence and said, “You owe me an apology.” His comments were caught on camera.

Bruce commented, “I guess we’re giving birth to snowflakes” and claimed the child “pretty much stalked the vice president.”

A clip of the original Fox News video is posted on the Media Matters website.

The boy’s mother, Dr. Ingrid Herrera-Yee, called for Fox News to apologize for its coverage of the incident. Herrera-Yee told CNN’s Jake Tapper that her son’s exchange with Pence was a positive moment of her son having a social interaction and observing manners. She also explained that her son, who is 10, is on the autism spectrum. Mediaite published a video clip of her interview.

She added the obvious — that children shouldn’t be singled out on television.

“Please don’t use kids. Whether they’re typically developing kids — it doesn’t matter that he’s autistic or a military kid. Forget all that. He’s a kid. And you don’t use children as examples on national television like that. I would hope that this is the very last time that this happens.”

Herrera-Yee got her apology May 16.

“First of all, I am so sorry to the family,” Bruce said on Fox News. “My intention was never to hurt a kid and his mom. We had absolutely no idea that Michael was on the autism spectrum.”

Bruce added, “A main lesson here, no matter intent, is to leave kids out of our political discussion.”

A Fox News spokesman just emailed me to let me know that they will be calling the mom directly to apologize. https://t.co/fLHr9Tezoy

Video of the apology is below.